The “Gathering of the Clan”

After Lake City, we headed east across the state to the Rose City area where Pat’s brothers, Geri and Wayne, have a cottage for the annual “gathering of the clan” over the Fourth of July holiday. Every year the cottage looks more like a campground with multiple tents and trailers.

In the past years we just parked our 17-foot traveler trailer in the front yard.  There was much conversation of where our 38-foot “Big Ole Trailer” was going to go.  Pat and I parked the trailer up the road from the cottage and walked down the recon the options before driving into a situation we couldn’t get out of.  After much discussion we decided to try the front yard again.  With Pat watching the rear of the trailer and me watching to front, I was able to ‘thread the eye of the needle” between the trees and posts along the road and get it in.  How we were going to get out was still in doubt!

Another great time over the Fourth of July.  Kayaking on the Rifle River, snorkeling in Rifle Lake, fireworks in Rose City and way too much food!  But we loved it all! 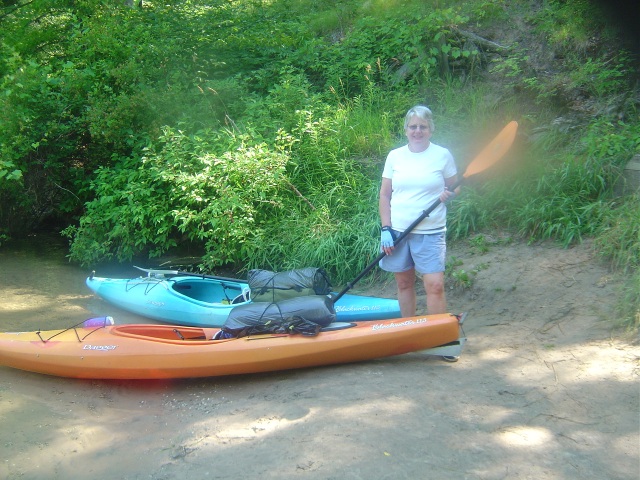 My brother-in-law Geri pulled the posts out that lined the road and it was a piece of cake to back out of the front yard.  Well, no doubts where we will be parking in the future.

We moved to Geri’s “Back 40” and set up the trailer there.  I have to head down to Warren, MI to present some training there on Monday and then Tuesday I am flying to Pittsburgh for the Corps of Engineers.  There has been way too much activity lately.  Isn’t this supposed to be relaxing?

I came back late on Thursday (like 1:00 am) and we are packing up to spend the week at Oak Beach County Park on Lake Huron.

Bob and his wife, Pat, are fulltime RVers. They sold their home in Michigan in June, 2011 and now travel the country, living on the road. Home is Where You Park It!
View all posts by Michigan Traveler →
This entry was posted in Fulltime RV, Michigan, Michigan Traveler and tagged Bad Axe, fifth wheel trailer, Fourth of July, fulltime RV. Bookmark the permalink.

1 Response to The “Gathering of the Clan”