Posted on September 8, 2015 by Michigan Traveler

When we started fulltime RVing back in 2011, our first stop was at the vacation home of our friends, Stan and Betsy, in Lake City. Stan has a huge workshop in their backyard and a gravel parking spot right next to his shed. It was like having your own private campground and Stan even put in a 30 amp RV plug for us.

Both Stan and Betsy have retired and have a good life in the area. We went with them to play Euchre at the Elks Lodge in Cadillac, I did some geocaching in area and Stan paddled with me to the other side of the lake to recover a cache that was on an island. Later in the week we were blessed to have another set of friends, Roger and Darcy join us for dinner one evening and it was great to spend time with old friends.

Sunday, July 19th, we headed back to Bad Axe, it was certainly different without three girls with us and we settled into the farm routine. I mowed the lawn and worked on finishing up a couple of batches of wine that Geri and I had started in June. Pat worked in the gardens, weeding, hoeing, and picked fresh vegetables and fruit.

One day we took a drive up to Pointe Aux Barques to visit a couple of Pat’s cousins, Margie and Don Wessels. They had just bought a new fifth wheel trailer and were camping at Lighthouse Park.

We took advantage of being in the area to visit Grindstone City. In 1834 Captain Aaron Peer pulled his ship into a protective bay on the north shore of the Thumb to weather out a storm on Lake Huron. While making repairs to his ship his crew discovered a large deposit of sandstone that had a very fine grit, perfect for grindstones and sharpening stones. Worldwide demand soon earned the town the nickname of Grindstone Capital of the World.

The town became largely a company-built town, with homes, a grist mill, wharfs, and a booming industry with two quarries. A salt mining operation produced 125 barrels of salt each day during the 1870s, and the first railroad built into Grindstone City began transporting the stones by rail in the 1890s.

By 1888, the Cleveland Stone Company bought property owned by other companies to become the sole quarry and grindstone company in town, employing about 150 men and manufacturing 35 to 40 tons of grindstones each day.

The grindstone industry at Grindstone City died in 1929. The town platted the area and sold the property mostly for summer or retirement homes.

Today, the few traces left of the grindstone industry here are some of the large grindstones used as decor for private homes or piled, seeming nonchalantly, at places like the town’s free public lake access and boat launch park.

One of the best things about

Grindstone City is the General Store which is now an ice cream parlor and claims to have the largest ice cream cones in the Thumb. I think they are the largest ice cream cones in the country. On our way in I saw a guy with a cone with three huge scoops and jokingly said, “You got a small one, right?” Then I got inside and discovered that was a Small! Each scoop is the size of a softball, a Baby size is one scoop, Kiddy is two scoops, and a Small is three scoops. We both got Kiddy cones and I estimated we each had about half a quart of ice cream!

Once a year the Detroit Chapter of the 82nd Airborne Division Association and the 425th Regimental Association have a joint picnic at the Bruce VFW Post in St. Clair Shores. It’s a lot of fun for my fellow Rangers to hang out with the Paratroopers of the 82nd. The weather was beautiful as always – I don’t know why we always seem to have great weather for this event. There is always plenty of food, free beer, and war stories that get better with every telling. When we start the event with the Pledge of Allegiance I felt such pride. It’s a wonderful feeling to be able to hang out with these warriors.

We took a day to make another

run up to Grindstone City for more ice cream and to do some geocaching in the area. We made a special stop at a local winery called the Dizzy Daisy Winery. I’m not sure where the name came from, but there is an interesting back story. A local farmer decided to grow grapes on a portion of his land with the intent of selling them; however, there were no buyers. Consequently he decided to make wine himself. He studied and researched, converted a building he used for milk into a winery and the Dizzy Daisy was born. We sampled some of his wide variety of wines and I found it interesting to see the owner working in the tasting room.

I normally use my brother-in-law’s dumping area behind the barn for a makeshift rifle and pistol range. This year I took some time to build a frame to hang some targets and measure a 25 meter distance from the target. It was nice to have a decent range to fire on and to see my marksmanship skills haven’t degraded too bad. 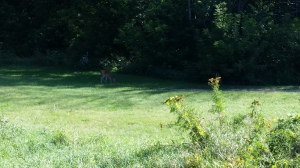 My primary mode of exercise has been bicycling and I combined exercise with geocaching for a couple of days with a couple of 20 mile rides to find some clusters of caches. I explored some of the local back roads and some wind turbine farms. A one geocache I saw a couple of deer fawns. Great exercise and great fun!

We decided to do some local traveling and on August 23rd left Bad Axe for Suttons Bay on the Leelanau Peninsula near Traverse City.