Posted on September 7, 2016 by Michigan Traveler

We left the Tacoma area on August 28th and headed east over the Snoqualmie Pass.  As we drove east I was struck by the difference in terrain.  We had just left the deep forest of the Cascade Mountain range and now we were driving through desert.  The mountains force the clouds to give up their rain on the western side, so there is nothing left to fall on the east, hence the desert conditions.

We were on our way to Superior, MT.  My wife, Pat, had arranged for us to raft the scenic portion of the Clark Fork River and do a wine tasting at the same time – what a great way to celebrate our 43rd wedding anniversary!  We camped at nearby Quartz Flat National Forest Campground.  This was an unique place to spend the night.  The entrance is through a rest area and there is a tunnel under the highway to connect to the rest area (and another loop of the campground) on the westbound side.  Someone in state government was thinking outside the box when they designed this setup.  We arrived around lunch time and drove to Pangaea River Rafting later in the afternoon.

Pangaea River Rafting has a unique program where they take you down the river on a raft and treat you to wine, snacks, and a light dinner in the raft!  Our guide, Meagan, was terrific!  She told us about the river, pointed out osprey and turkeys, and kept our wine glasses full as we drifted with the current.  We rafted the scenic portion, downstream from

a series of Class II and III rapids, so the river was gentle and relaxing.  We chatted and enjoyed the late afternoon sun shining through the trees on the western bank as we floated downstream.  There were a few spots where the water formed rapids and Meagan took us through them to provide a few thrills.  It was a great time and a lot of fun!

I never knew that Kevlar could be sewn like any other cloth.  Like most fire fighters, the Smoke Jumpers are paid to wait (for a fire).  Once the alarm is sounded they drop whatever they are doing and suit up.  They have two minutes from the alarm to boarding the jump aircraft, no time to make mistakes.  That kind of response is the result of training and repeated practice.  Just like Airborne Infantry, the parachute is only a means of transportation to get to where they have to fight.  They are fire fighters first, and parachutists second.  All-in-all, this is a great tour that takes you into the actual work spaces of the Smoke Jumpers and gives you a very clear idea of what these brave men and women are called on to do. 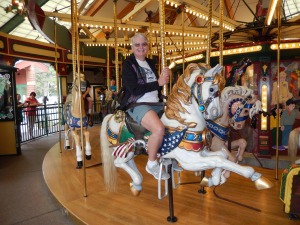 The next day we drove into Missoula and rode our bikes on the Riverfront Trail System.  As we rode the trail we stopped at the Carousal for Missoula.  In 1991 local cabinet maker Chuck Kaparich told the city, “If you give it a home, and promise never to take it apart, I will build a carousal for Missoula.”  The city fathers agreed and Chuck, with a crew of hundreds of volunteers, assembled an antique frame and constructed more than 40 ponies, two chariots, 14 gargoyles, mirror frames, and the largest band organ in continuous use in the United States.  It is a popular attraction and there were several kids on the carousel while we were there.  Pat was able to take a ride for under a dollar.

Another unique stop on the Riverfront Trail was the Boone and Crockett Club.  It was founded in 1887 by Theodore Roosevelt and housed in the old Missoula Train Depot.  Its mission is to promote the conservation and management of wildlife, especially big game, and its habitat, to preserve and encourage hunting and to maintain the highest ethical standards of fair chase and sportsmanship in North America.  For over a century the Boone and Crockett Club has championed the passage of laws, the establishment of institutions, and the designation of wild lands which today make up our nation’s conservation system. The National Forest, the National Park, and the National Wildlife Refuge Systems exist today in large part because of the extensive efforts of the Club and its dedicated membership.

Our last stop of the day was Fort Missoula.  The fort was established in 1877 in response to local requests for protection in the event of conflict 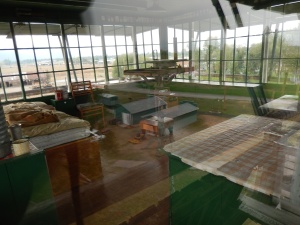 with the western Montana Indian tribes.  Fort Missoula was never a stereotypical walled fort, but an open fort that required the troops to perform offensive, active patrolling in the area.  The history of the fort included its use as a CCC camp during the depression, and an Alien Detention Center for German, Italian, and some Japanese internees during WWII. There is a great display of Missoula history in the Museum and several original buildings scattered throughout the facility, including an actual Forest Service Lookout Tower.  Today the fort is home to the Historical Museum at Fort Missoula.  Other government agencies such as the Forest Service, and non-profit organizations occupy many of the buildings on the property.

The icing on the cake was a performance at the RV park called “Montana Melodies.”  Two men who were Forest Service firefighters and still live in the area serenaded us with songs of the area, including some they had written themselves.  This was followed by a serving of huckleberry ice cream from the park staff.  What a great way to end our visit!

Bob and his wife, Pat, are fulltime RVers. They sold their home in Michigan in June, 2011 and now travel the country, living on the road. Home is Where You Park It!
View all posts by Michigan Traveler →
This entry was posted in Fulltime RV, Michigan Traveler, Montana and tagged Boone and Crockett Club, fifth wheel trailer, full-time RV, fulltime RV, Historic Museum at Fort Missoula, Michigan Traveler, Pangaea River Rafting, RV Forums, Smoke Jumpers. Bookmark the permalink.