Posted on November 12, 2016 by Michigan Traveler

In our travels we have attended state fairs all over the country and we make a point of attending the North Carolina State Fair whenever we are here in the fall.  I don’t suppose that there is anything special about this state fair compared to the others we have attended, but it is fun. 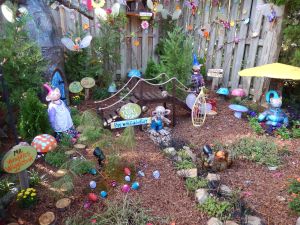 One exhibit that we have not seen in other fairs was the lawn exhibits, part of the Flower and Garden Show.  The garden and lawn exhibits showed some real creativity.  There were also volunteers available to offer advice to amateur gardeners.

We toured one unique hall, the Village of Yesteryear, filled with artisans specializing in trades of years gone by – potters, woodworkers, tin workers, makers of musical instruments, and weavers to name a few.  I just loved wandering through this place, admiring the products of these craftsmen.

Another unique performance was the Folk Music Festival.  The performer I liked the best was Jeff Robbins.  He played a selection of Appalachian music on a number of homemade instruments, such as a banjo made from a fruit cake tin.  He even showed how to make a one string guitar from a soup can, 1 X 2 board and a old guitar string.  He was a great show! 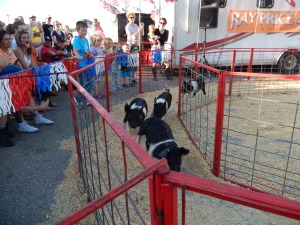 We enjoyed some of the rides, checked out some of the animal buildings and watched some of the competition.  I think the most fun was the pig races.  We saw pig races for the first time at the Florida State Fair and made a point of seeing them again here. Even though it’s called the pig race, there were pigs, chickens, and small goats as well.  Each section of the crowd has its champion and cheered them on.

The most fun about attending the fair is the food.  We strolled past many food vendors before making our decision. You haven’t eaten at the state fair if you haven’t had a funnel cake!

Camping in a state park does not facilitate door to door trick or treaters.  The staff and the Friends of Falls Lake put on a Halloween Party in the campground.  There was face painting, popcorn, nature talks, and ghost stories at the campfire followed by a spooky night hike. All had a great time!

The Mountains to Sea Trail is an extended trail that runs from the Smokey Mountains to the Atlantic coast.  A major section of the trail traverses the Falls Lake State Recreation Area.

In the last two years I have backpacked different sections of this trail.  This year I started near the Falls Lake Dam.  The weather was perfect for backpacking – cool, but not cold.  The clear, sunny sky made for a beautiful day.  The trail closely parallels the shoreline of Falls Lake.  As I hiked I searched for geocaches, which were in abundance along the trail.  In fact there were so many that I had to stop trying to find them or I would run out of daylight before I reached my campsite for the night.  With the fall color change, the forest was colorful.  I’m not sure what the other sections of the Mountains to Sea Trail are like, but this stretch is beautiful.  The sun was fading as I arrived at my campsite and I worked quickly to get my hammock set up and water bottles filled before it was too dark.  Consequently I fixed and ate dinner by the light of my small campfire.  As inconvenient as that may have been, there is something special about being alone in the woods, surrounded by darkness, being able to relax and focus inward without distraction.  The night was on the cold side, but my hammock system worked well and I was comfortably warm all night.

The next morning I was up early and had a relaxing breakfast while waiting for the morning chill to pass before I resumed my trek.  It was a bit cooler than the previous day, but just as beautiful.  I found a few more geocaches along the way and finished up at the Barton Creek Boat Launch where Pat picked me up.  I look forward to exploring other sections of this trail in the future.