We returned to Falls Lake as Camp Hosts in April.  For most of our time there the weather was beautiful and we enjoyed ourselves by visiting with our daughter, Elisabeth.

While we were serving as Camp Hosts at the Falls Lake State Recreation Area in October of 2016, we rode out Hurricane Matthew.  It rained for days and days.  When it finally stopped, we watched the levels of Falls Lake rise as the U.S. Army Corps of Engineers held the water back in our lake to reduce the amount of flooding in downstream communities.  I estimated that the lake levels were approximately six feet above the normal level.  As the days went by we watched the tragic consequences of all of that rain on many communities as the rivers flooded and people had to flee from their homes into shelters.

Near the end of our stay a major weather front swept through area, bringing storms and heavy rainfall.  The rain fell over a shorter period of time and in a more concentrated area than in October, and the impact on our lake was severe.  We had several tent campers in our loop of the campground, and I walked around reminding everyone to make sure their ground cloths were not funneling the rain water under their tent.  As I was doing this I came across a woman who was camping by herself who had a small river flowing right under her tent.  I got a couple other men to help me out and we moved her tent to higher ground within her site.  The next day when I checked on her the lake level was rising, and looked like it could flood the lower portions of her site.  One of the Rangers helped her move to a higher site in the loop.

The next day we discovered that the lake was expected to rise several more feet and would soon flood all of the lower campsites.  The Ranger staff was notifying all of the incoming campers that their reservations were being changed to other campsites.  Later in the day the Corps of Engineers advised the staff that the level would soon rise high enough to flood the electrical boxes of some of the campsites.  That caused the Rangers to move all of the campers in our loop to other sites in the campground. The woman we had helped earlier was told she would have to move to the Rolling View Campground and she broke into tears. She was just tired of moving. Fortunately her daughter got some of her friends to help her with that move and she should be done moving after that.  Here is what her first site looked like the day she left for Rolling View.

As the lake continued to rise, it flooded the sewer lift station for our loop so the bathroom couldn’t be used.  County health regulations forced the Rangers to close this entire loop, compounding the problem they were dealing with.  Our own site was now without power, but we moved to a site in our loop high enough that its electrical service had not been compromised.  Because we were considered staff, we could stay in the closed loop and not use a site needed for other campers.  We continued our duties, but just cleaned different bathrooms. Camping in a closed loop has its advantages.  It was so quiet, especially in the evening.  It was like boondocking in the middle of a forest, but with electrical and water hookups.

It was interesting monitoring the lake levels, and I estimated that the lake rose about ten feet in less than a week.  I can only imagine what the impact of what those millions of gallons of water flowing downstream would have done to communities that already had rivers cresting their banks.  One morning we paddled our kayaks around the shore of the campground.  We paddled into some of the campsites and the playground.  We even paddled over one of the campground roads.  We picked up  some trash and were able to put it into trash cans without leaving our kayaks.  As we posted on Facebook that afternoon, “If you have a reservation for Site #62, your site is NOT available.” 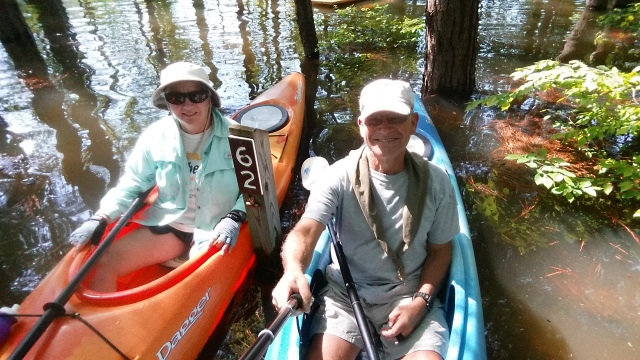 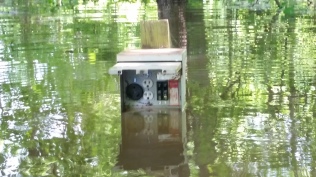 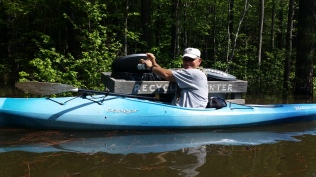 We did do other things while in the Raleigh area like kayaking on the Neuse River with Elisabeth, helping her with some work on her house, celebrating my birthday and Elisabeth’s birthday, and geocaching with a friend of mine from our stay in Key West.  However, our most significant memory will always be the flooding on Falls Lake.