Posted on October 21, 2017 by Michigan Traveler

Munich is one of the largest cities in Germany and used to be the capital of Bavaria. Frederick the Great ruled from Munich. For history buffs one of the major attractions was the Residenz, the Palace of the Wittlesbach dynasty. They may have spent their summers in other castles, but they ruled Bavaria from Munich. Touring the Residenz you get a feel for what it was like to live in the palace. If I thought Hohenschwangau and Neuschwanstein were gaudy, the Residenz was even more so. There were murals, portraits, statues, marble and gold leaf everywhere. Huge halls for every purpose and large rooms with only one chair for the emperor. We only toured a portion of the Residenz and by the time we left I was glad we were not members of the royal court. 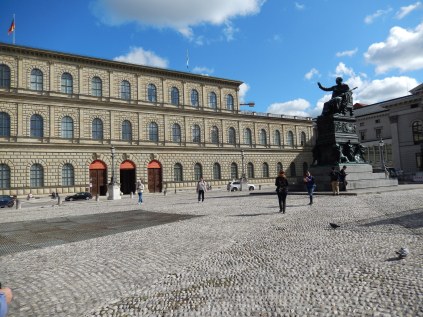 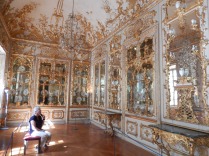 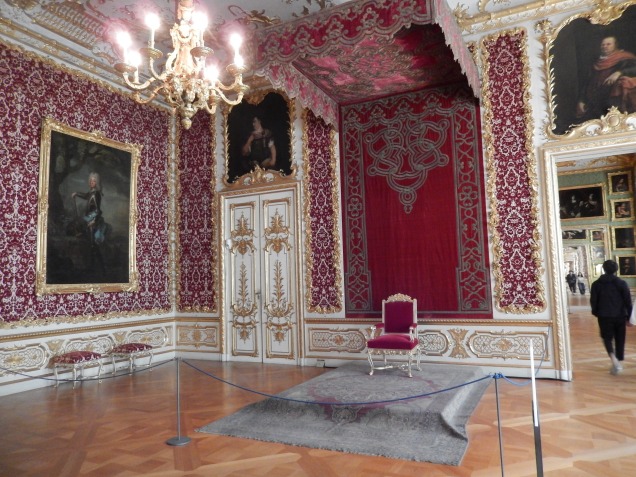 Munich is home to Germany’s largest, and most famous beer hall, the Hofbrauhaus. The Hofbrauhaus is actually owned by the State of Bavaria. The Hof comes from the brewery’s history as the royal brewery for the Kingdom of Bavaria, which why there is a crown in their logo. It is a huge place, but still local. Locals have their own tables, and have their mugs locked in racks on the walls. We originally visited in the morning when things were calm, and considered it for lunch until we stopped by and found it already too crowded and too loud. 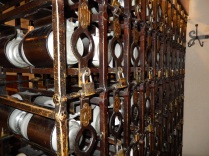 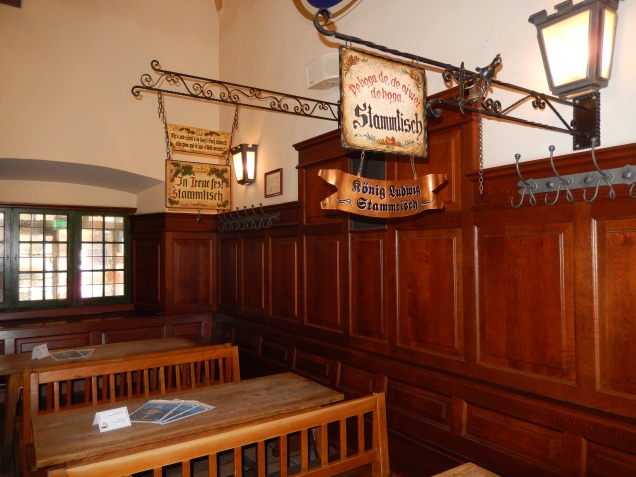 One of my fondest memories of previous trips of Germany was sitting in Gasthauses, sharing a table with Germans, and doing my poor best to carry on a conversation with them. Usually their English was better than my German, but it was always fun and they appreciated my attempt. In Munich I had a chance to do that again. We went to the Augustiner am Dom, one of the brewhouses (brauhaus) owned by the Augustiner Brewery. It was smaller and less chaotic than the Hofbrauhaus. Shortly after we were seated a German couple was seated with us at the table (the normal custom in Germany). They were from Karlsrule and were spending the night in Munich before continuing their trip. I spoke to them in German and they answered me in English, when we didn’t know a word they looked it up on their phone. I had a wonderful time and it will be one of my fondest memories of our trip.

I thought I had planned our trip to avoid the crowds of Oktoberfest, little did I know that Oktoberfest would start on our second day in Munich and the festival grounds were only a five minute walk from our hotel. Oktoberfest was originally a wedding reception for the Royal Wedding on 12 October 1810 for Crown Prince Ludwig, later to become King Ludwig I. The citizens of Munich were invited to attend the festivities held on the fields in front of the city gates to celebrate the royal event. It was such a good time, they decided to make it an annual event. Over the years the activities began earlier and earlier until it moved into September to take advantage of the warmer weather.

It wasn’t as chaotic as I thought it would be although we saw people all over town dressed in the traditional Bavarian attire of Lederhosen and Dirndl skirts. Even though the festivities did not start until the Mayor tapped the first keg at noon, we saw people walking to the festival grounds in lederhosen and dirndl skirts, beer in hand, at 8:30 in the morning.

After we finished our sightseeing in downtown Munich, we went to the festival grounds late in the afternoon. It was like a huge state fair but without the livestock exhibits. There were food booths, rides, souvenir booths, and beer tents.  The beer tents were actually beer halls. They were two stories high and could hold thousands of people, each of the major brewers in the area had their own beer hall and there were open air beer gardens for anyone who couldn’t get a ticket to the beer halls. We had a lot of fun. People go all out for Oktoberfest, young and old, and enjoy this unique celebration. 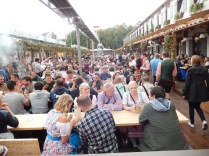 Munich was also the birthplace of the Nazi Party and Hitler’s “Beer Hall Putsch.” Just outside Munich is the first concentration camp, Dachau. The day of our tour was a gloomy, drizzly day and set the perfect tone for this visit. A number of things were interesting to note about Dachau. It started out as a punishment camp for political prisoners. They were not put to work because the Nazis needed the laborers, but to punish them. As bad as the initial conditions were, they got worse. Two of the barracks have been reconstructed and show how the accommodations got worse as the camp population grew. Dachau was opened in March 1933 with a population of 5,000 prisoners, when it was liberated in April 1945 there were 30,000 prisoners, of which only a fraction survived. While everyone knows Jews were kept in the camps, there were also thousands of Poles, Russians, Homosexuals, Jehovah’s Witnesses, and Gypsies. Also four female British SOE (Special Operations Executive) agents were confined and murdered at Dachau. Over 188,000 prisoners passed through the gates of Dachau. In the Memorial area of the camp is a Jewish Memorial that shows images of prisoners who threw themselves on the electrified fence to kill themselves to avoid further suffering. In Dachau, death was often preferred to suffering. Our visit to Dachau was a very sobering experience, but one that I think everyone should have. We can never let something like this happen again.

Rothenburg ob de Tauber is one of the few medieval walled cities left in Germany. Rothenburg was a major trading hub, but war, plague, and a change in trade routes left Rothenburg in dire financial problems until it became a tourist destination. In Rothenburg you can walk along the ramparts of the old wall, walk the cobblestone streets, and get a sense of what it was like in medieval Germany. One of our highlights was the Night Watchman’s Tour. Hans-Georg Baumgartner, dressed as a medieval night watchman leads a 100+ audience through the streets of Rothenburg in a humorous, entertaining, but factual description of the history of Rothenburg. I thought this was the best part of our visit. 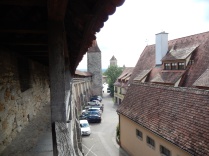 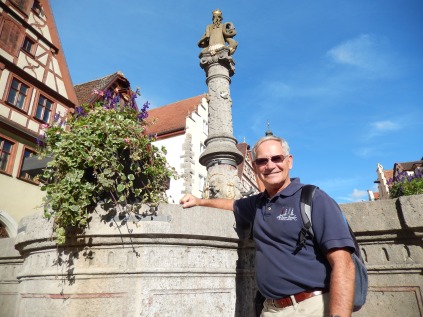 In our initial planning we decided a trip to Germany would not be complete without including Berlin. I grew up during the Cold War, and as an Army officer I trained to fight the Soviets and East Germans. The Berlin I knew was divided, not like it is today. Our first stop in Berlin was the Brandenburg Gate. This used to be just across the border in East Berlin and now the U.S. Embassy is right next to it. You can see where the Wall used to be by a pattern of cobblestones set in the sidewalk. Across the street from the Brandenburg Gate is a memorial to those who died trying to escape to freedom in the West. 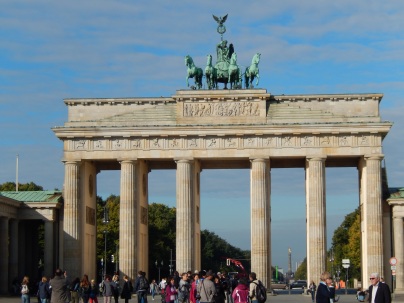 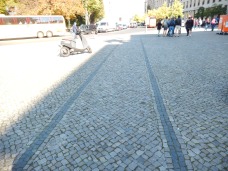 Site of the Berlin Wall

We used our Rick Steves App to explore Berlin, but one site he didn’t cover was Checkpoint Charlie. This was the primary crossing point in the American Sector. There are several museums around the area and the one we visited told the story of Germans fleeing to the West and the risks they took, with some losing their lives in the process. The U.S. checkpoint was nothing more than a small shack, like a toll booth, while the East German side was a large complex of gates and inspection stations. I guess it took a lot less to let people into the West than it did to keep people in the East. I think too many of us take our freedom for granted because we have never really lost it.

On September 20th we flew back to Michigan. We had a wonderful time and I think we will need to take some time to rest after our busy, but rewarding trip.

Bob and his wife, Pat, are fulltime RVers. They sold their home in Michigan in June, 2011 and now travel the country, living on the road. Home is Where You Park It!
View all posts by Michigan Traveler →
This entry was posted in Fulltime RV, Germany, Michigan Traveler and tagged Augustiner am Dom, Checkpoint Charlie, Dachau, full-time RV, Hofbrauhaus, Michigan Traveler, Oktoberfest, Rothenberg ob de Tauber, RV Forums. Bookmark the permalink.

4 Responses to Return to Germany – Part 3 (Munich to Berlin)