Every Tuesday afternoon I volunteered as a docent on the Coast Guard Cutter Ingham Museum. It’s a lot of fun meeting people who are in town for a short visit or off a cruise ship. We give them a chance to see history up close onboard the cutter. It’s a pleasure to be a part of this crew and to preserve some history. 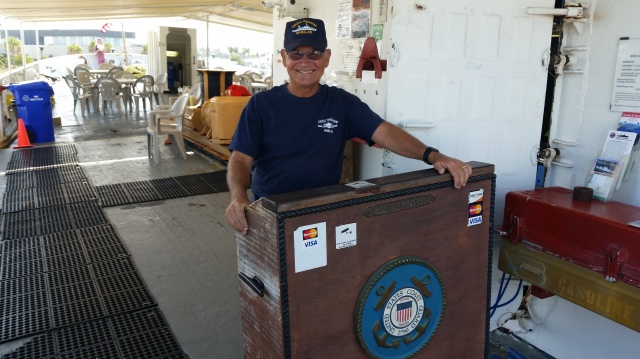 One afternoon a bunch of us rode our bicycles into Key West to visit the Key West First Legal Rum Distillery, the first legal distillery in town. We sampled a variety of rum, took a tour of the distillery, and had a presentation on how to make an authentic Cuban Mojito (with samples of course!). We finished the evening with snacks and drinks at a local establishment for happy hour before we rode back to the campground. 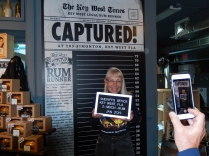 Eddie and Tina Grooms are the party masters of Sigsbee Island. They planned the Sigsbee Shuffle in January and did an excellent job. They grew an event that had been limited to 40 people to 140 participants and still kept everything smooth and fun! Last year they had held a blind wine tasting that had about 29 wines entered into the contest, this year they did it again with 75 entries! Only Eddie and Tina could pull this off without a hitch and they did – What fun! They divided us into three groups, with 25 wines for each group. There were breaks for food, so we still had taste buds left for the later wines. I had entered my homemade “Green Apple Riesling and it took first place in its group of 25. I can now say I have made an award winning wine!

It’s just not right to watch the Super Bowl without a party and there were multiple Super Bowl parties in the campground. In our case the game was projected onto a screen with the sound broadcast through one of our musician’s amplifiers. There was plenty to eat and drink as well as fans for both teams. The friendly rivalry was active and fun. 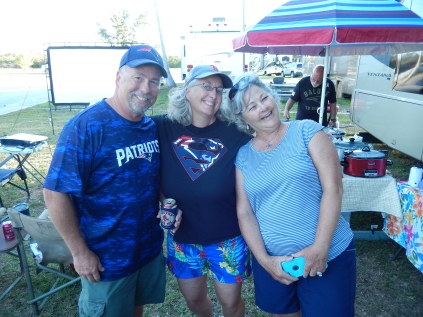 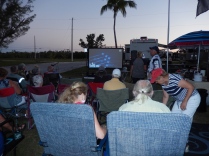 Every year I present a class on how to make your own homemade wine. In the class everyone gets to see the process and tools for each step of the wine making process and wrap it up with a tasting of a variety of my own homemade wines. Everyone seemed to find it interesting and definitely enjoyed the samples! 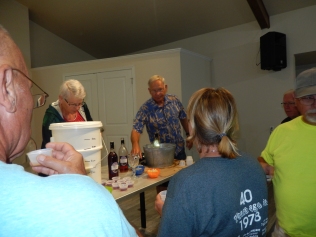 I play my guitar in the Praise Band for the base chapel and one Sunday we had a special guest show up for services, our Vice-President Mike Pence. Apparently the Chaplain only had 20 minutes warning before Mr. Pence showed up and I didn’t even know he was there until I saw him in the congregation. I guess now I can say I performed for the Vice-President of the United States! 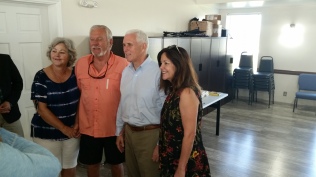 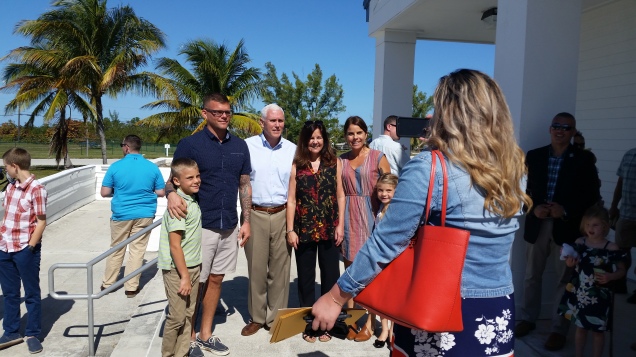 SCUBA diving is popular in Key West. Ed and Ruth Kluk, friends from Michigan are both avid divers. We dove on a couple of reefs and the second largest artificial reef in the world – the General Hoyt Vandenberg. Formerly an Air Force tracking ship, the Vandenberg is both a challenging and rewarding dive. 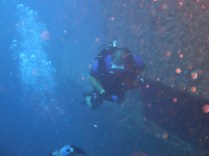 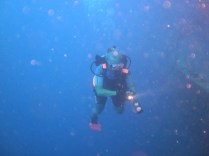 Again we went out for a sunset cruise on the Appledore Star with some friends that came to town for a brief visit. Key West offers a number of offerings of sunset cruises and the Appledore Star is our “hands down” favorite. The crew is great, interacts with the passengers, and will let you take a turn at the ship’s wheel. We finished the evening with coffee and key lime pie at Kermit’s Key Lime Pie Shoppe.

One of my musician friends, Harriet Riendeau, (www.sweetharriet.net) and I put on a folk music performance at our campground community center. We called it a Happy Hour Folk Music Performance and did it on a Sunday afternoon. When we scheduled it we didn’t know that we were in conflict with two other events, but we still had more than thirty people in the audience. I’m not sure who had more fun – the audience or Harriet and I! 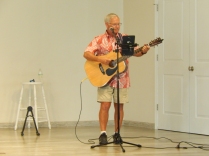 Every weekend there is a big Flea Market on Big Pine Key and a bunch of us drove up to check it out. It was interesting browsing the various booths, but the hit of the day for me was stopping at the Bucktooth Rooster for a huge rack of ribs. There was enough left for dinner the next day! 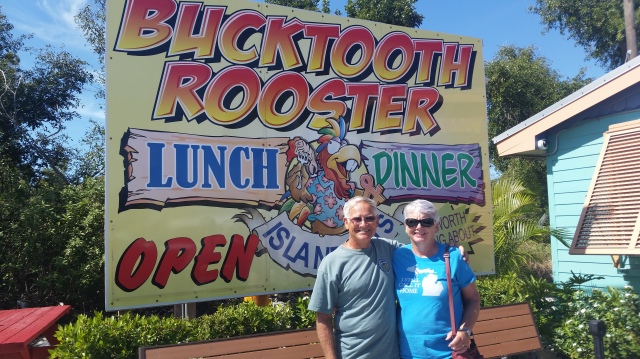 One of the new events this year was the Survivor Challenge. A take off of the TV show, our Challenge had a scavenger hunt, limbo contest, puzzles, coconut toss, and a kayak race. It took a lot of effort to put it on but was a lot of fun. I have no doubt it will back again and even better next year.

Note the form on this coconut throw 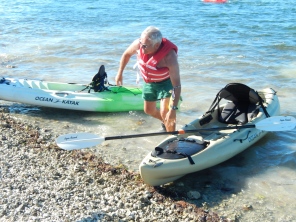 Sunsets in Key West are always fun and one of the best spots for sunset is the Coast Guard Cutter Ingham Museum. Every Friday and Saturday night they open the ship for a Sunset Happy Hour. As opposed to the popular Mallory Square, the atmosphere is calm and the view is great! This night we were joined by two of our friends, Dave and Suzie Cook. The night we were there was a special occasion as one of the Admirals of the Couch Republic Navy had passed away and they did a wreath toss and 21 Gun Salute in his honor. This was followed by a great dinner at Jack Flat’s on Duval Street. 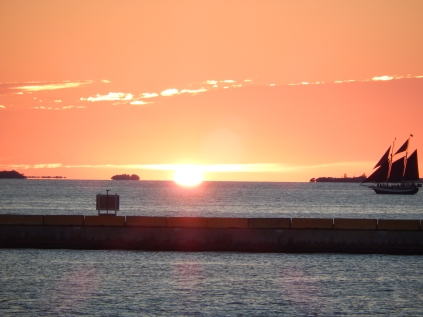 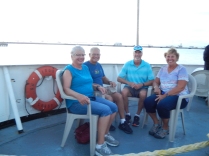 One of the last things I did this year was visit the Key West Lighthouse and the Shipwreck Museum. The Shipwreck Museum does an excellent job in describing the work of the wreckers in Key West. These brave men would sail and row out to ships that had foundered on the off shore reefs, to save the crew and salvage the cargo. At one time this activity made Key West the richest city, per capita, in the U.S.  Docents in period costumes are stationed throughout the museum to help guests explore and get a deep understanding of the wrecker industry and modern day salvage operations. 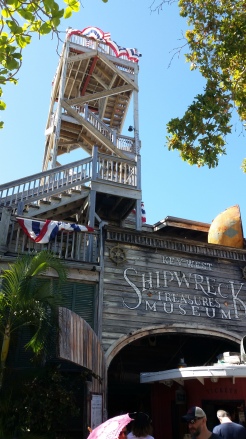 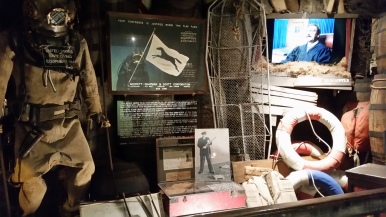 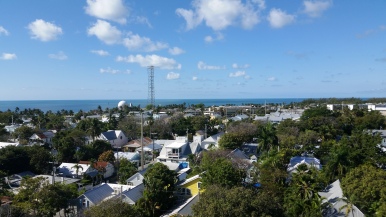 The Key West Lighthouse is a self-guided tour that gives you some great views of the island from the top of the lighthouse. I have learned a lot about lighthouses over the years. Here I learned that, while General George Meade is famous for his Civil War duty, he was the Army engineer that designed and supervised the construction of many of the lighthouses in Southern Florida. 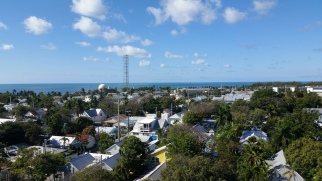 Finally, our time in Key West came to an end and we were UTR (up the road) on March 4th. Rest assured that we will be back next year to enjoy all of the fun times with our many friends!

Bob and his wife, Pat, are fulltime RVers. They sold their home in Michigan in June, 2011 and now travel the country, living on the road. Home is Where You Park It!
View all posts by Michigan Traveler →
This entry was posted in Uncategorized. Bookmark the permalink.

2 Responses to Just Another Day in Paradise, Key West 2019