Posted on October 26, 2019 by Michigan Traveler

Our route to Albuquerque was by way of Henderson, NV, to visit some friends from our RV caravan to Alaska in 2013. As we would be traveling near Death Valley we decided it would be good to visit there. We had visited Death Valley once before, but only for one day and we wanted to see more of it.

We checked out the campgrounds in Death Valley National Park, but decided it would be better to stay in the town of Beatty, the Gateway to Death Valley, and drive into the park. We stayed at the Beatty RV Park. It is a small park just outside of Beatty that has pull through, full hook up sites for a very reasonable rate. Mike, the manager, gave us some good advice on how to tour the park and gave us some brochures to help us plan our visit.

The Beatty Chamber of Commerce has developed a series of brochures that make planning a trip to Death Valley a breeze. Our biggest help was the “5 Day Itinerary 360° of Adventure.” The 24 page “Gateway to Death Valley 360° of Adventure added more in depth information on each stop. You can get digital versions of these at http://www.beattynevada.org/BrochureRack.html.

The next day we were on the move early to avoid as much heat as possible. We were generally following the itinerary from Day One in the “5 Day Itinerary 360° of Adventure.” Our first stop was Rhyolite, a historic gold mining town site. In 1904 prospectors Shorty Harris and Ed Cross found gold in the area. In 1905 Rhyolite was established and platted. By 1908 the population was estimated at between 5,000 and 8,000. However about that time the mine production began to drop and by 1920 the population was down to 14. There are relics of the old buildings still standing and one of the most interesting is the “Bottle House.” This was built by Tom Kelley and was make of empty wine and whiskey bottles and mortar. When it was completed it was given away in a raffle. 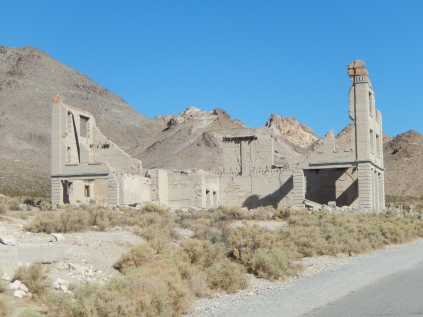 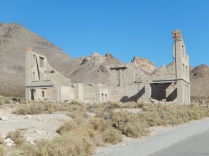 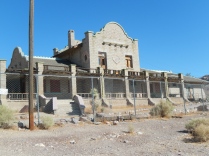 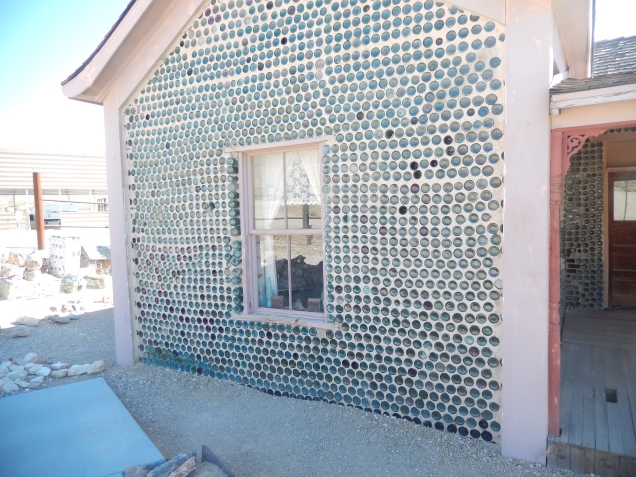 Near Rhyolite is the Goldwell Open Air Museum. This is an art museum in the middle of the desert. Here you can see the Painted Lady reaching to the sky, a ghostly depiction of the Last Supper, a ghostly bike rider and more. A strange, but interesting site. 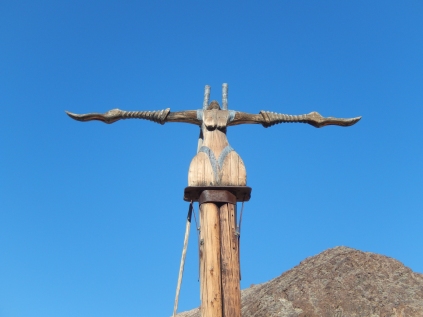 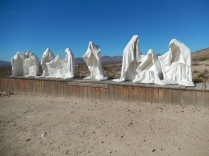 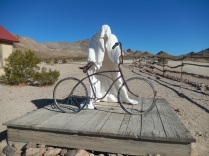 Leaving Rhyolite we had the Hell’s Gate Experience. We descended into Death Valley at Hell’s Gate near Mile Marker 10. The temperature on the dashboard was showing 79°. By the time we had descended to the valley floor the temperature had increased to 101° – a 22 degree change! 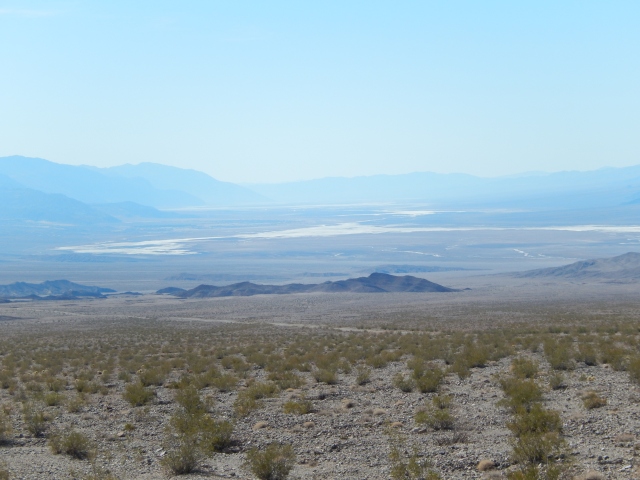 The temperature rose throughout the day as we toured the park. By the time we got to Badwater in the afternoon the temperature was 108°. Even though we were sweating we couldn’t feel it because it evaporated out of your clothes before they felt damp.

Our next stop was the Harmony Borax Works. Here are the remains of the Harmony Borax processing plant and the wagons that were used to haul the borax to Mojave by teams of twenty mules. The twenty mule team wagons were made famous by the TV series in the early 1970’s called “Death Valley Days,” portraying true stories of the Old West. The series was sponsored by the Pacific Coast Borax Company (20 Mule Team Borax) and the last host of the series was Ronald Reagan. The radio and television versions combined to make the show “one of the longest-running western programs in broadcast history.”If you’ve never heard of it, talk to your grandparents. 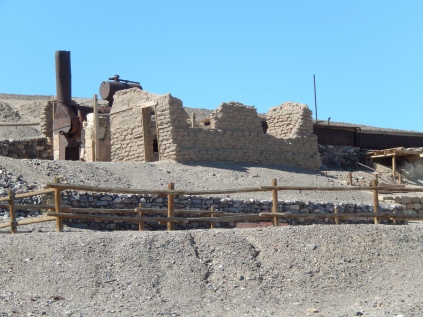 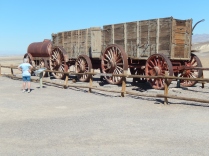 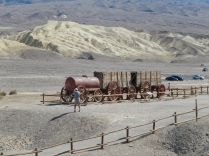 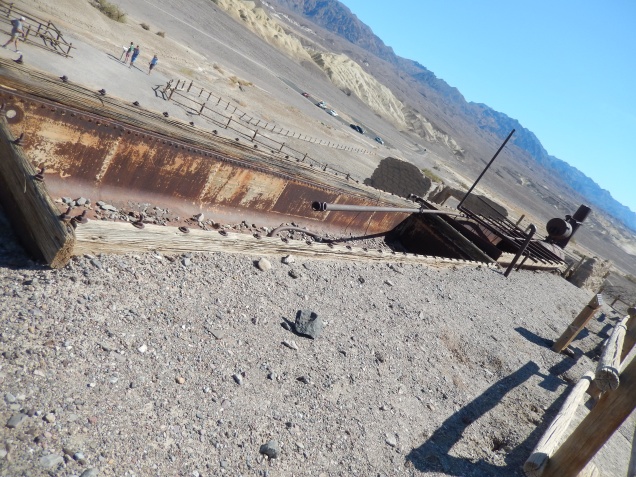 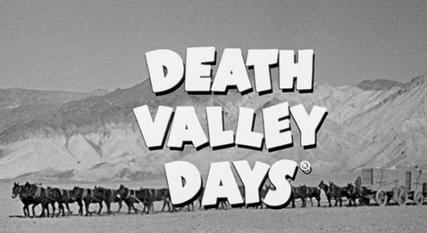 After a brief stop at the Visitor Center we drove to Badwater, the lowest elevation in the United States. Here there is a spring from seepage of water that has worked its way down from the surrounding cliffs. The water is so salty that even mules won’t drink it. There is a sign 282 feet above Badwater that says, “Sea Level.” This is where our thermometer read 108°. 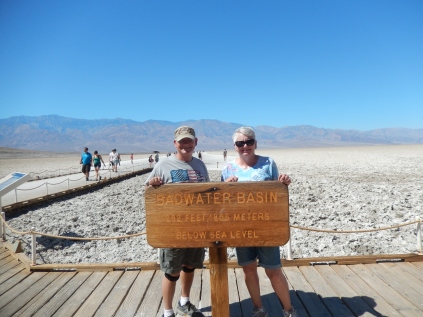 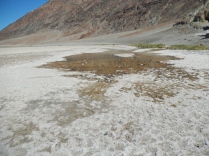 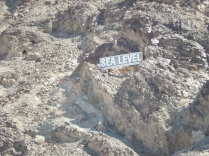 From Badwater we drove to the Natural Bridge. The road is not for the faint hearted, it is a washboard with potholes. I thought the truck was going to shake apart a couple of times and I felt like a “bobble-head.”

The Natural Bridge was made by erosion. As a stream bed was being cut by water, the water ran into erosion resistant rock and the stream flowed around it to the north. After a time the water again sought a more direct path and it undercut the harder rock, forming the bridge. When I see formations like this I am awestruck by the immense, unrelenting power of nature. 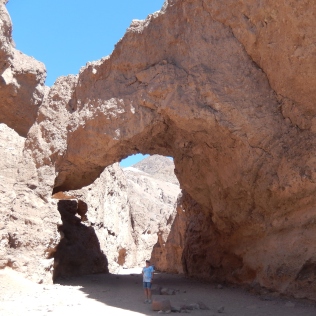 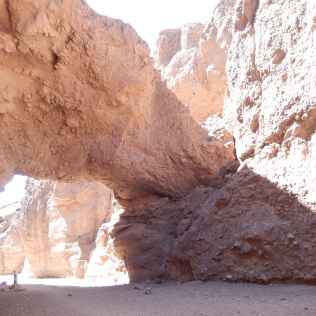 From there we drove to the Artist’s Palette. The colors of the minerals in the soil have created a geological artist’s palette of bold and pastel colors.

Zabriskie Point is where we started our hike when we were here is 2012. The second half of that hike was quite challenging, but this time we just enjoyed the view and the memories. 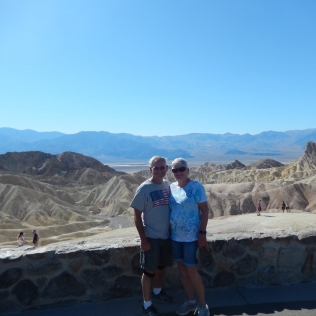 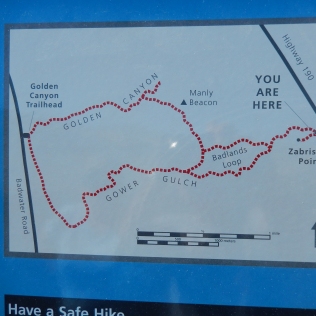 On September 26th we drove to Henderson, NV to stay at the Sam’s Town KOA RV Park. Our purpose was to visit with some friends from the RV Caravan trip to Alaska in 2013, George and Ann. 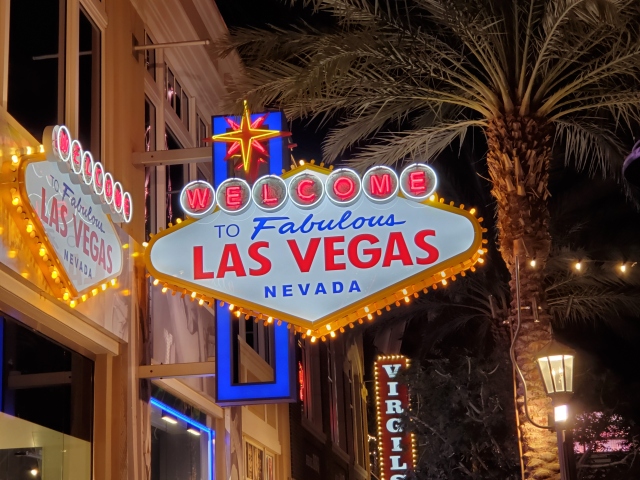 We signed up with the casino and got some coupons and gaming credits. Sam’s Town has a free shuttle to the Vegas Strip and we rode it to check out the Strip. We wondered around, did a little gambling, and had some fun. 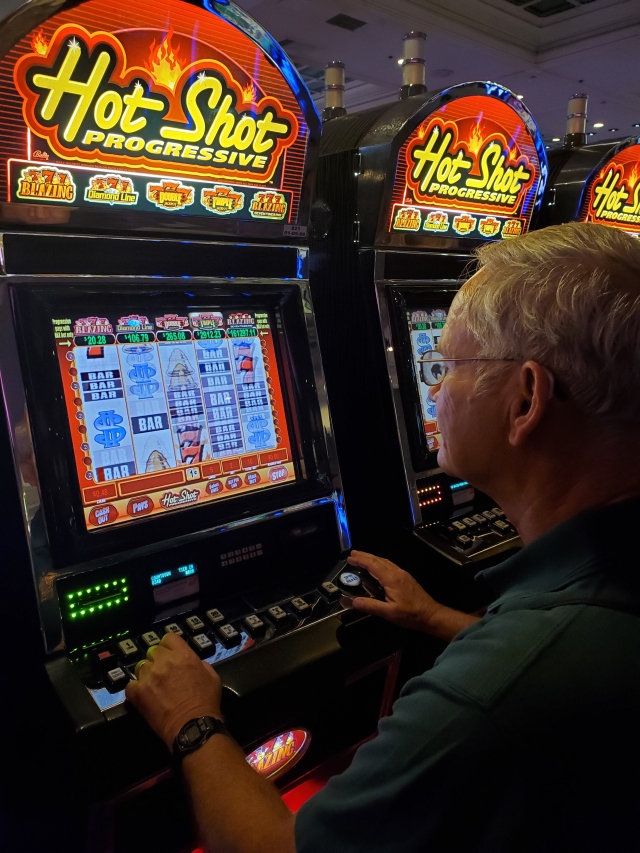 George and Ann are avid hikers. George had a short hike near where they live that he thought we would enjoy. It was a nice four-mile round trip to Petroglyph Canyon. It was a nice hike with some dry waterfalls that we had to scramble (that’s a rock climbing term for easy rock climbing) up. That made the hike more interesting. We were so focused on the trail that George had to point out the petroglyphs. There must have been dozens of them and it was interesting to try to figure out their meanings. 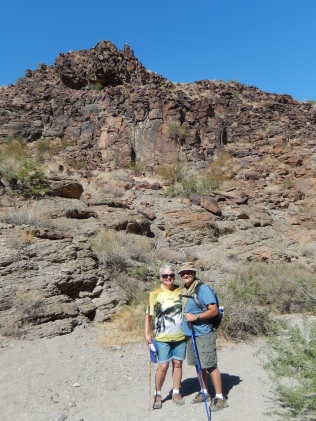 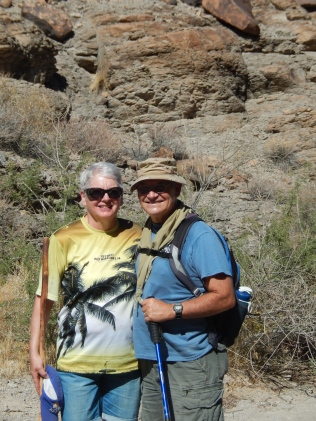 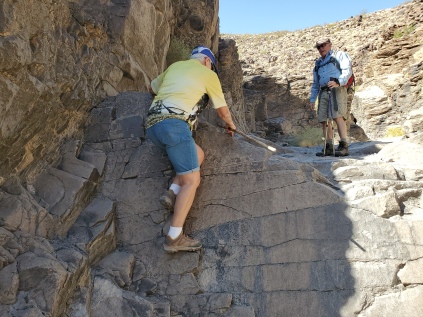 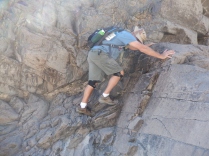 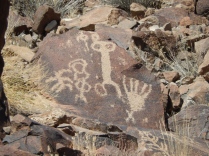 The next evening we met them for dinner at a seafood restaurant. It’s nice to be able to share a meal with good food and great friends. 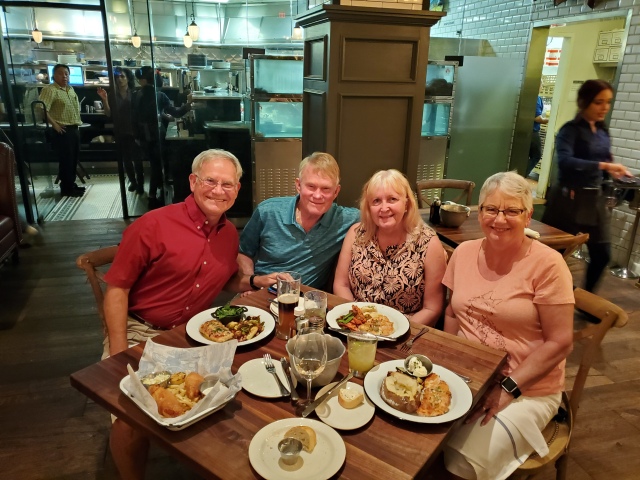