Posted on April 1, 2015 by Michigan Traveler

We hosted a small party at our campsite combining our friends from 2013 and our friends from 2014. Jim and Philly were “headed up the road” the next day and Alina had talked about how she had taken up the guitar, so we thought we would have a jam session. Of course it ended up being more of a performance when we discovered she hadn’t brought her guitar with her. However, we had a good time together and it was great to have everyone together.

I finally got to dive 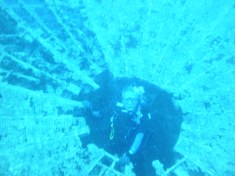 on the Vandenberg again. The Vandenberg is an Air Force radar ship that was used for tracking satellites and was sunk off Key West as an artificial reef. It is the second largest artificial reef in the world. The thing is huge and it would take a week of diving to see it all. I dove with Lost Reef Adventures and they run a nice operation. The crew was sharp and took care of all of us in fine style. I recommend them to anyone looking for a good SCUBA dive center in Key West. So often when I show up for a dive, it is a roll of the dice if I get a good dive buddy. I lucked out on this trip with another Advanced Open Water Diver named Dave. We were very equal in our skill level and worked well as a team. I should always be so lucky!

We thought we were going to move into a full hookup site on Wednesday, but were told that was not going to happen, but we would most likely move on Friday. On Thursday I was coming back from my fitness walk and found a Camp Host parked in front of our RV. “You’re moving – TODAY,” he said. Apparently someone on active duty had canceled a reservation. So we got down to packing up and were set up in our new site in “Hollywood” before lunch. Considering it got up to 90o it was nice to have air conditioning again! Otherwise a nice, lazy afternoon.

Geocachers will, on occasion, host a “geocaching event.” On February 28th, John and I attended a couple of these and got a chance to meet a few of the local geocachers. One of the events was a CITO (Cache In, Trash Out) event where we picked up trash and litter near a couple of cache sites along Government Road. 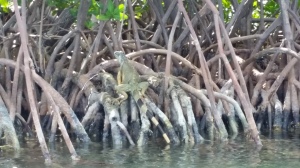 Our Sigsbee geocaching crew (and their spouses) went after a couple of geocaches that were only accessible from the water. On the way there we saw a iguana swimming across the river. We had never seen anything like this before – another Key West first! I think this may have allowed John to claim that he has found every geocache on Key West. I may have to hide a couple more just to give him something to do!

I made another SCUBA dive on March 5th. This time we dove on two reefs, Marker 32 and Nine Foot Stake. Once again I was fortunate on a dive buddy and teamed up with an Emergency Room doctor from Chambersburg, PA. The seas were rough with waves up to 3 1/2 feet. Normally you can get away from the turmoil on the surface once you are underwater, but in the shallow water of the reef we were feeling the wave action even at 25 feet underwater. The waves made getting back into the boat a bit exciting with the boarding ladder bobbing underwater like a yoyo! 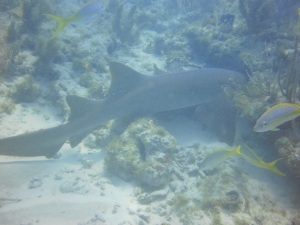 The visibility on both dives was very good for this time of year and there were plenty of fish to see. Our big treat was seeing two nurse sharks at Nine Foot Stake. One of them had its nose burrowing into the reef trying to dig a lobster out of its hiding place.

This world seems to be getting way too small. No matter how far you are from home you always seem to run into someone you know. Through Facebook I discovered one of my high school classmates was vacationing just up the road at Islamorada. Carolyn and her husband drove down to meet us for lunch. It was interesting to hear what she had been up to for the last 47 years – Wow! Has it been THAT long? 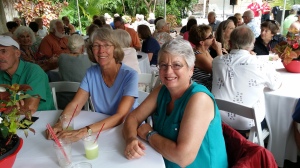 The Old Island Restoration Foundation conducts tours of local homes and Pat volunteered to serve as a docent for the February tours. The Foundation hosted a luncheon for all of the volunteers at the Oldest House in Key West. We met another one of our friends, Marie, who had also served as a docent. It was interesting to hear about the broader mission of the Foundation and their efforts to preserve the history of Key West through its buildings.

That evening Pat’s brother, Geri, and his wife, Marcia, flew into Key West to spend a week with us. Considering the temperature was -1 when they left Michigan, they were very happy to enjoy temperatures in the 80’s! 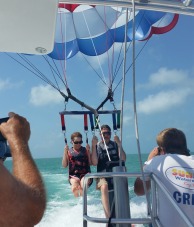 It was fun to show them around the island. We showed them around Duval Street and did some shopping and stopped in for a drink in Jimmy Buffett’s Margaritaville. Marcia surprised all of us when she agreed to go parasailing. Pat & I joined them and we all enjoyed flying above the harbor under a parachute. Showing them around caused us to do some things we had never done before, such as going on a sunset dinner cruise. It was a great time with good Caribbean music and good food. The only disappointment was the lack of a good sunset due to low clouds.

We did some of the obligatory things like getting a picture at the Milepost Zero sign and the Southernmost Point Marker. Of course, we had to do sunset at Mallory Square where we enjoyed several street performers and a lovely sunset.

We spent one day traveling to the Dry Tortugas. We traveled on the Yankee Freedom ferry to the island and toured the fort and the grounds. Pat and I also enjoyed snorkeling out to the coral heads in the waters around the fort.

But all good things must come to an end. Geri and Marcia flew back to Michigan on March 16th and the next morning we headed up the road to the Manatee Cove RV Park at Patrick AFB near Cocoa Beach.

Bob and his wife, Pat, are fulltime RVers. They sold their home in Michigan in June, 2011 and now travel the country, living on the road. Home is Where You Park It!
View all posts by Michigan Traveler →
This entry was posted in Florida, Fulltime RV and tagged Cameo RV, Dry Tortugas, Geocaching, Key West NAS, Lost Reef Adventures, Mallory Square, Old Island Restoration Foundation, SCUBA diving, Vandenberg. Bookmark the permalink.