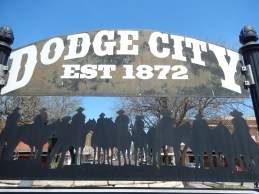 How many of you grew up watching “Gunsmoke” on TV?  Marshal Matt Dillon and his sidekick deputy Fetus?  How about Miss Kitty and Doc hanging out at the Long Branch Saloon?

As we were planning our trip from Florida to Washington it was pretty simple to select the major stops along the way.  After that we looked for places to break the rest of the trip up into reasonable drives.  As we planned the route between Branson, MO and Colorado Springs, Dodge City, KS was the perfect distance.  When I saw this I said to myself, “We have to stop at Dodge City, if only to say we visited the site of “Gunsmoke.”

We stayed at the Gunsmoke RV Park on the west side of town.  This is a nice campground with a lot of pull-through sites and trees and grass.  We relaxed after a long drive and did some research on what to see in the area.

The next morning we started by going to the Visitor Center and got a map of the self-guided walking tour around town, as well as some other advice on what to see.  For all of you geocachers, the Visitor Center is a geocache.  Go in and ask for the geocache and they will hand you the container that is kept behind the desk.  This was probably the easiest and most creative geocache I have picked up.  As a bonus I got my picture taken with Marshal Matt Dillon.

We followed the route of the walking tour.  The city has metal “pole art banners” mounted on lampposts that highlight periods of history. Periodically we came across interpretive signs, “story boards,” describing the actions and people involved in the city’s history.  Along the route there are “Trail of Fame Medallions.” Like the stars on the sidewalk in Hollywood these medallions recognize key figures in the history of Dodge City.  The medallions recognized Wyatt Earp – formerly the US Marshal for Dodge City, John Henry “Doc” Holliday and his girlfriend, “Big Nose” Kate Elder, and others.  They also recognized the cast of “Gunsmoke” and other TV westerns that involved Dodge City. 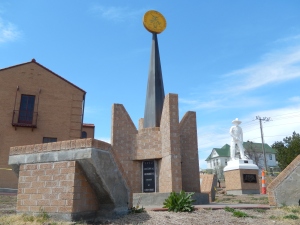 The site of the original Front Street in Dodge City is now occupied by current businesses.  The architecture of the buildings has changed due to fires and urban renewal projects so it has no resemblance to what we all watched on the TV show.  However, it was interesting to see the site of the original Long Branch Saloon and the Dodge House.

We walked up Boot Hill, and although the original cemetery was replaced by a municipal building, we were able to view a commemorative marker of Boot Hill.

Fort Dodge was established to provide security for the area and the trade routes before Dodge City existed.  Because of problems with excessive drinking at Fort Dodge, the Post Commander forbid any alcohol within five miles of the fort.  To remedy this situation George Hoover put a board across two piles of sod exactly five miles west of Fort Dodge to open the first bar in what would become Dodge City.

Fort Dodge is now the site of a VA medical facility and a state run Veterans Home.  We toured the Fort dodge complex and the museum.  Between the displays and the volunteer docent we came away with a clear picture of life on the frontier.

The next day was spent taking it easy and practicing the “fine art of doing nothing.”  On Thursday, April 14th we headed for Colorado Springs.