We selected Mountain Home, ID as our next waypoint on our journey to Washington.  Mountain Home is on the route of the Oregon Trail.  As I read about the western expansion and migration I couldn’t help but compare how easy our travels are compared to the hazards those pioneers faced.

We looked at several different RV parks in the area and chose the Mountain Home RV Park.  I was a little concerned when it kept coming up on Google Maps as Mountain Home Self Storage!  It turned out that these are two businesses owned by the same people on the same property.  The RV park was just great.  The sites are large and had well-maintained lawns for each site.  The staff was very friendly and helpful and their WIFI had a consistently strong signal.  The pool and hot tub were nice benefits that we enjoyed. Another plus that I always appreciate was free coffee in the office.

One of the first things we did

was to visit one of Pat’s cousins, Jim, who lives nearby.  Jim had served in the U.S. Air Force and was an advisor to the Idaho Air National Guard before he retired and settled down in the area.  He lives on a mountain (literally) outside of Boise.  When we drove to meet him it took us almost a half hour to drive from the base of the mountain to his 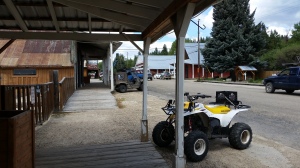 home.  Talk about location, location, location!  He has the best view!  It is a rustic home and suits him just fine.  We talked a lot about what each of us had been up to and then drove down the mountain to have lunch in Idaho City.  This is an Old West Town that looks today like the towns we saw on Bonanza and Gunsmoke.  The old buildings have been maintained and re-purposed for today’s functions.   We also visited the Pioneer Cemetery.  It is always interesting to see how long people lived in those days and tragic to see how many children never saw their third birthday.  The oddest thing to me was the lack of organization.  There were no rows, but graves were scattered randomly within the cemetery.

A couple of days later we drove to the Craters of the Moon National Park.  “The surface of the moon as seen through a telescope,” is how geologist Harold Stearns described the area in 1923.  The area is a result of volcanic activity along a geologic fault known as the Great Rift.  The mounds in the area were formed from cinder thrown from the volcanoes as they erupted.  There are acres of lava that flowed from the volcanoes.  One of the interesting things is how vegetation has returned to the area and continues to flourish.

When a lava flow develops a hard crust, forming a roof over the still-flowing lava stream.  Eventually the lava blocks itself at the source.  The remaining lava flows out from under the roof, leaving a cave known as a “lava tube.”  There are several lava tubes in the park.  Most are fragile enough that visitors are not allowed in them.

However, the Park Service has set aside four caves and tunnels formed by lava tubes for visitors to explore.  These are not like the Carlsbad and Mammoth Caves.   They are not developed, they are completely natural and a unique experience.  We walk through the largest one, called the “Tunnel.” It was interesting and challenging as we walked around some fallen rubble and crawled over other rubble piles.  We literally crawled out through a hole in the rock to exit the lava tube.

After a few days of relaxing, we left on May 16th for Portland, OR