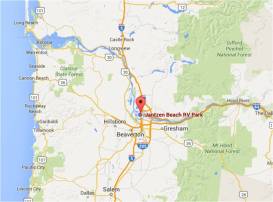 When the pioneers of the 1800s started their westward journey many were focused on what is now Portland, Oregon as their final destination.  Our journey west brought us to the Jantzen Beach RV Park on Hayden Island in the Columbia River, at the north end of Portland.  It wasn’t your typical campground in the woods, but very convenient for sightseeing in the area.

The weather was forecast to turn to cloudy with rain showers later in the week.  Consequently, on our first day,  we decided to backtrack to the Columbia River Gorge National Scenic Area to hike in the area of Multnomah Falls.  We originally planned to hike to the top of the falls.  However, we ran into a group that suggested we hike a loop that went beyond Multnomah Falls and followed another stream to the base of the mountain.  It was quite a climb as we hiked up a series of eleven switchbacks.  The view of the falls was incredible.  As we hiked higher we passed two other falls and then followed the trail to see the Fairy Falls.  From there we descended a series of switchbacks on the trail to the bottom.

After leaving the falls we drove to the town of Cascade Locks.  At one point the Cascade Locks were critical to the movement of commercial shipping on the Columbia River.  These locks have now been replaced by newer locks at the Bonneville Dam.  The town has created a park around the old lock chambers with a museum, picnic areas, and event center.

The next morning the awoke to weather that is typical of the Pacific Northwest, cloudy with what the locals call “sun breaks,” and occasional showers. However, we have never let the weather drive our agenda so we packed our rain jackets in my backpack and drove to the light rail train station across the river to head downtown. 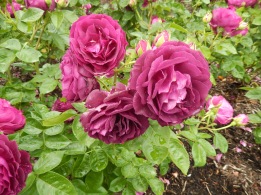 Our first stop was to visit the International Rose Garden in Washington Park.  Pat is the flower and plant lover in the family, but even I was impressed with the size and the beauty of the roses.  There were so many varieties of roses.  I have never seen so many different flowers.

We rode a combination of busses and light rail trains to the other side of Portland to visit the Creo Chocolate Factory & Cafe.  This was an interesting and educational experience. 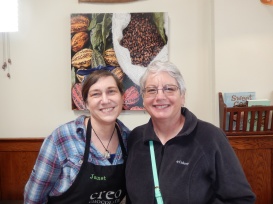 Creo Chocolate is a small, family-owned business that makes chocolate from cacao beans grown in Ecuador.  They have a relationship with a farm in Ecuador and purchase their beans directly from that farm.  Janet, one of the owners, led a tour of their process.  During the tour we saw processes that I had never heard of.  Some of their equipment has been built especially for their small scale operation.  Janet and her husband are passionate about their business, keeping things as natural as possible, giving tours to educate the public, and working with local providers.  I encourage anyone visiting Portland to check it out.  Take time for a hot chocolate and brownie.

Our next stop was a walking tour of the old town area of Portland.  We looked at the bus schedules and decided it would take us as much time to travel by bus as it would to walk, so walk we did!  It was interesting to walk through this part of Portland.  We never felt uncomfortable and it was interesting to be that up close and personal in a strange city.  The tour was interesting in that we heard about the “seedy side” of Portland – the bars, strip joints, and houses of ill repute.  However, we were disappointed in that we had been promised a tour of “Underground Portland,” the tunnels below street level.  Instead of walking through tunnels we were taken into the basement of the tour’s office and shown a tunnel barricaded with rubble.  We were told that the tunnels were used for drainage and to move cargo from the docks to the stores, not for Shanghied sailors to serve on the ships that came to Portland.

Our final sightseeing stop of the day was Powell’s Bookstore.  Powell’s occupies an entire city block and has three stories of books.  I could have spent all day here, but we made it a short stop and then had dinner at Deschutes Brewery and Public House  This craft brewery has good food, good beer, good atmosphere, and great service.  If you are visiting Portland, it should be on your list. 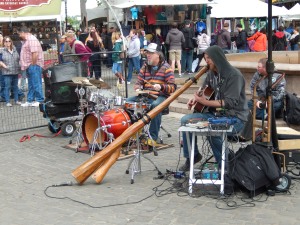 The next day started out dreary and overcast, but weather doesn’t stop us from having a good time.  We took the train to China Town for Portland Saturday Market.  It was lots of fun to wander through the booths of vendors.  No matter how many fairs and shows we have been to, each one is different.  There were street performers as well.  The food booths were particularly inviting, but we were able to resist the temptation.

Voodoo Donuts is a Portland legend and is only a short walk from the Saturday Market.  We considered indulging ourselves but the line was a block long so we passed on the opportunity as well.

This trip has been a good one for seeing relatives.  My cousin, Barb, and her husband, Karl, live in Oregon, but not close to Portland.  Fortunately they are really into rock collecting and wanted to check out a source near us, so they joined us for lunch.  It has been literally a decade or two since we have seen each other.  We had a great time exchanging stories about what we had been up to and talking about our parents.

While on our morning fitness walks we saw something unique to the Pacific Northwest – floating houses!  Floating homes started as lodging for harbor workers and logging crews.  Now they have evolved into a unique (and not inexpensive) lifestyle.  They definitely got my attention –   what a great way to live if you love the water!

Our last sightseeing stop in Portland was actually across the river in Washington.  Fort Vancouver was originally established as a trading post of the British Hudson’s Bay Company.  Fort Vancouver was the heart of the company’s fur trading empire in the Pacific Northwest.  In 1846 the British and Americans agreed to set the northern border of the United States along the 49th Parallel and Fort Vancouver became an American fort. 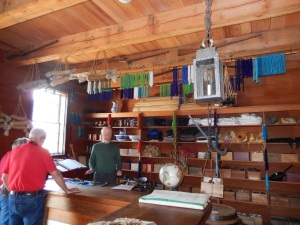 We were able to tour the reconstructed Hudson’s Bay Company fort.  The fortifications were constructed more as a means to protect the furs and trades goods from theft than to protect the fort from an attack.  We were able to see the bakery that produced hardtack to supply the ships that carried goods to and from England, the blacksmith shop, the fur warehouse, the counting house, and others.  As impressive as the buildings were, the garden where the personnel of the fort raised food for themselves and the local community was equally impressive.

Over the years the Army expanded the fort to include barracks, warehouses, parade field, and rifle ranges.  The most historic part of the expansion was quarters on Officer’s Row.  Officers who lived on Officer’s Row include Ulysses S. Grant and George C. Marshall.  General Marshall served here as the commander for two years and his house is available to tour.  General Marshall was the Army Chief of Staff during WWII and the chief strategist of the Allied victory.  He was the author of the Marshall Plan for the reconstruction of Europe at the end of the war.  He also served as a former U.S. Secretary of State and President of the American Red Cross.  The Marshall House is a grand structure, has displays of General Marshall’s life, and is still used for meetings. 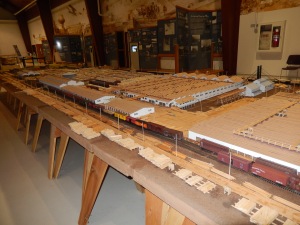 In 1911, local aeronauts began using the polo field of Fort Vancouver as their base of operations.  In 1912 the field was a stop for the first airmail service in the Pacific Northwest.  In 1914 America entered WWI and America needed spruce from the Pacific Northwest to build airplanes.  Due to labor uncertainty in the area, the Army created the Spruce Production Division, drafted many of the local loggers to log the lumber, and in 48 days built the world’s largest spruce cut-up mill.  Within days of the armistice in 1918, production was halted, the mill dismantled, and the Army discharged the workforce.  After WWII the Army declared Pearson Field to be surplus and transferred the title to the City of Vancouver.

It took most of the day to tour the Fort Vancouver National Historic Site and I can’t remember when I have walked through so much history in such a small area.

On Wednesday, May 25th we took the last step of the journey we started in March in Tampa, FL and headed to Camp Murray in Tacoma, WA.