Posted on February 8, 2018 by Michigan Traveler

Our country’s military services have sets of values that guide the behavior of their members, whether they be Soldiers, Sailors, Airmen, Coast Guardsmen, or Marines. The Army Values contain a value of “selfless service” and  the Air Force describes this as “service before self.” The Navy, Marine Corps, and Coast Guard include “service” as a part of their value of “commitment.”

As full time RVers we generally spend our winters in Key West, after all wouldn’t you like to spend a couple of months down here, right after Christmas? We stay at the RV park that is a part of Naval Air Station Key West. Living in a community of active and retired military gives us a rather unique view of things and an opportunity to see Selfless Service in action.

Every morning when I go for my morning walk I see an elderly (I hate to use the word old, but I am younger than she is and most people stopped calling me young decades ago.) woman walking along the roads of this part of the base in a determined manner – she is on a mission! She has her grabber stick and several plastic shopping bags and she is picking up all the litter along the road. This also includes the causeway, so she gets all of the litter that is brought in by high tide. Her name is Janet and she is the most dedicated person I have ever met. 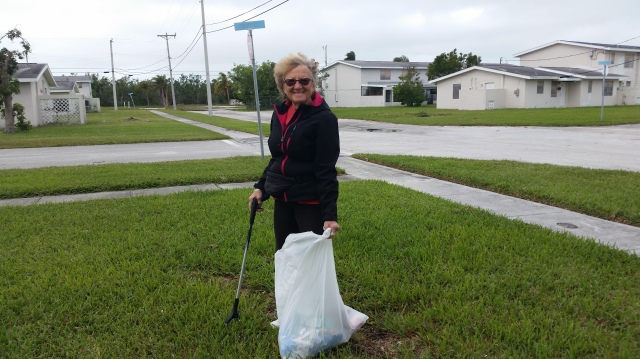 Shortly after we arrived here there was a Wounded Warrior Project cycling rally to promote veteran issues. Our crew of volunteers from Sigsbee Island (our RV park) were hard at work, serving meals to all of the participants.

The Key West Half-Marathon and 5K is an annual event and is a source of pride to the residents of the island. This was the 20th year of this race. Local businesses volunteer their time and services. Turtle Kraals and Shipyards hosted a breakfast for all of the volunteers as a part of the organizational briefing.  Once again our military community was front and center. We have two teams that man water stations along the course. Jack and Denny, our team leaders have been doing this as long as anyone can remember. We were on the course by 6:30 am on a cold and very windy morning, but all of our attention was on the runners, encouraging them as well as keeping them hydrated. Next to our station a husband and wife team played their guitars to encourage the runners – they just thought it would be a good idea.

The National Coast Guard Memorial is at the Coast Guard Cutter Ingham, a floating museum of Coast Guard history moored in Key West. Every day volunteers man the gangway, welcoming visitors to the ship. The Ingham is a privately-owned museum and could not continue to operate without the volunteers that paint her decks, clean the displays, perform other maintenance, and welcome her visitors.

This last Saturday we and other volunteers from Sigsbee joined a cleanup effort on Big Pine Key. The Middle Keys were the hardest hit by Hurricane Irma and even months after the hurricane there is still debris from wrecked boats and destroyed homes all over the area. Over 150 of us walked the streets and paddled in the canals in our kayaks. We pulled lumber from ruined homes and docks that had fallen into the canals and piled up on the banks. We also gathered debris from wrecked boats and other trash that was swept into the canals by Irma. Local businesses, themselves badly hurt by the storm, donated supplies, heavy equipment, food and beverages to aid the volunteers in this cleanup. 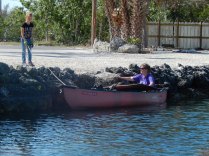 Selfless Service is a value we should all embrace. We are all blessed with talents that can be used to help others. It doesn’t take much. As an example, when we pulled into Sigsbee Island and were assigned an RV site, I knew that we were responsible to keep our site mowed and there are mowers available to us. Before we got all set up I went and borrowed one and mowed our lot. I then proceeded to mow the five lots next to ours. I knew they would be occupied by the end of the day – just a neighborly thing to do. I’m not trying to pat myself on the back, but to show it doesn’t take a lot of effort to help someone.

Ask your local library if they need help. Is there a non-profit organization that could use someone to answer the phones or stuff envelopes?  If you have web-design skills, possibly help maintain their website?  Check with your local church – do you sing or play an instrument? I’m sure they could use someone like you. What does the local playground look like? Could it use someone like Janet to walk through every day or two and pick up litter?

A local Boy Scout leader once told a group, “We don’t need experts, we just need people who care.”