Westward Bound for Washington, May 2019

Many times family is the primary factor in our planning on where to travel. Our oldest son, Scott, and his family (which includes our three granddaughters) have been living in University Place, near Tacoma, WA for several years. Last year our daughter, Elisabeth, moved from North Carolina to join them and now lives in nearby Lakewood. With most of the rest of our family back in Michigan we are trying to split our summers between Washington and Michigan.

After leaving Brian and Leah’s wedding in Michigan, we dropped our trailer in Milwaukee and flew to Tampa, FL for the graduation of Robin’s (our niece) daughter, Destiny from high school. It was like a mini family reunion and everyone had a wonderful time. 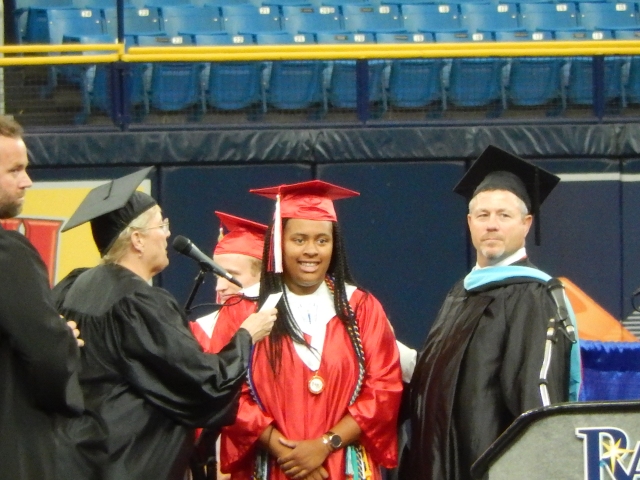 We spend Memorial Day in Milwaukee and my sister-in-law, Mary Lee, told us the traveling Vietnam Memorial was in a nearby town. We visited it to honor those servicemen and women who died defending freedom around the world. 1LT Ralph Miller, a former member of a National Guard unit that I commanded, was Killed in Action in Vietnam and I always locate his name whenever I visit the wall in his memory.

We stopped in Box Elder, SD and stayed at Ellsworth Air Force Base in their FAMCAMP (Family Camp/RV Park). It’s a nice place to stay with full hookups and FREE laundry. We drove over to Americas Mailbox to pick up our mail, but generally just relaxed On our way to Ellsworth we took a detour to drive through the Badlands National Park. It’s amazing to me to look out over this huge basin and realize this was once a huge inland sea until the Rocky Mountains erupted and caused this sea to drain into the Pacific Ocean. They have found fossils of all sorts of aquatic life in the area, but today we saw bison.

Our drive across the northern states was essentially a sprint in that we didn’t stay long at any stop and our sightseeing was kept to a minimum. Several times we crossed the route that Lewis and Clark took as they explored the new territory acquired as a part of Louisiana Purchase. It’s always s special to see places where significant historical events took place. For anyone interested in the Lewis and Clark Expedition, I recommend the book, Undaunted Courage. It’s a great description of leadership and discipline in an extremely challenging situation. 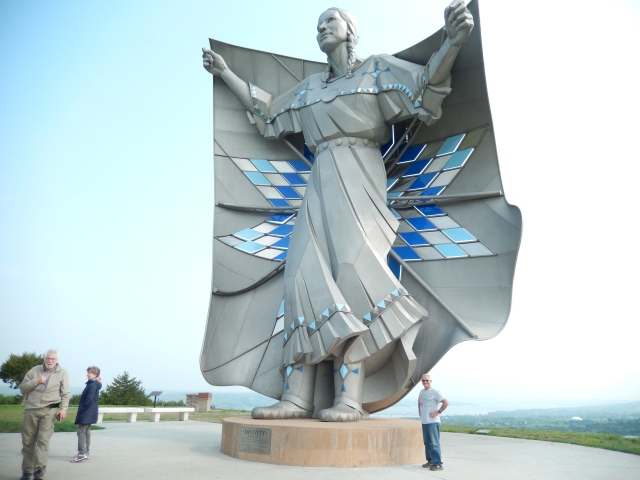 As we drove into eastern Washington we noticed the huge irrigation booms irrigating the fields. Eastern Washington is normally dry as the Cascade Mountain Range forces rainfall in the west leaving no moisture left in the clouds for the east and is especially so this year. Western Washington is also having a very dry spring. This was in sharp contrast to the flooding we saw in so many areas between Florida and Washington. We saw streams and rivers flooding over their banks, ponds and lakes instead of puddles in farm fields, and wooded areas along shorelines inundated from flooding.

You know you’re getting close to the Pacific Northwest when you see mountain ranges appear in your windshield. We’ll be staying in the Seattle/Tacoma area for the rest of the summer.

Bob and his wife, Pat, are fulltime RVers. They sold their home in Michigan in June, 2011 and now travel the country, living on the road. Home is Where You Park It!
View all posts by Michigan Traveler →
This entry was posted in Americas Mailbox, Holidays, Michigan Traveler, Military RV Parks and tagged full-time RV, Lewis and Clark, RV Forums, Vietnam Wall. Bookmark the permalink.