We arrived in Washington in early June, and most of the first month was spent helping our daughter rehab her new condominium. Wow, what a lot of work! We removed a floor to ceiling mirror that covered one of her living room walls, removed old florescent fixtures and replaced them with LED lights, replaced a bathroom sink, and painted almost every room. After all of that we were ready for a vacation! 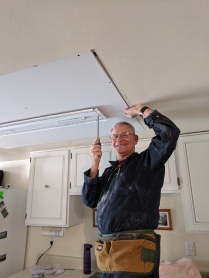 On July 10th we headed up to Naval Air Station Whidbey Island and their Cliffside RV Park. Cliffside is, in our opinion, the prettiest military RV park in the country. In 2012 they rebuilt the entire park from one circle of twenty sites to sixty sites in concentric arcs that are terraced so every site has an unobstructed view of Puget Sound. If that wasn’t enough Ken, the camp host and an avid gardener, has transplanted flowers from other locations to the campground. He keeps fresh flowers in the office and laundry rooms. 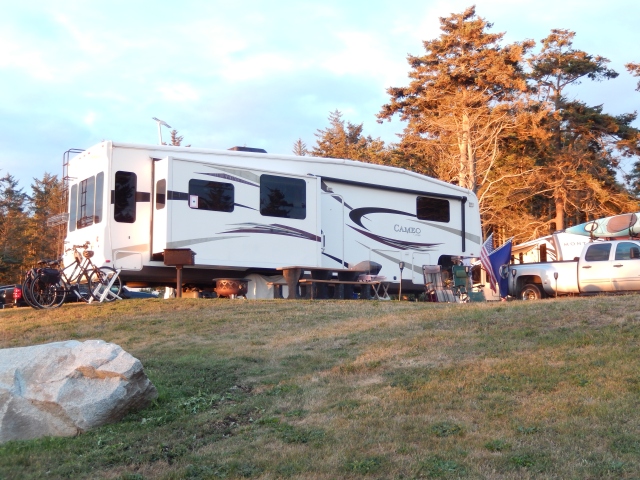 We walked or rode our bikes around the base every morning and generally kicked back and relaxed.  We shared the walking path with Whidbey Island rabbits that are everywhere.

We were here three years ago and did a lot of sightseeing then, so we didn’t feel we were missing out on too much by just relaxing. I did some geocaching in the local area and picked up a few more caches for my log. My favorite was at the local VFW and I took some time to admire their well-done veteran’s memorial. 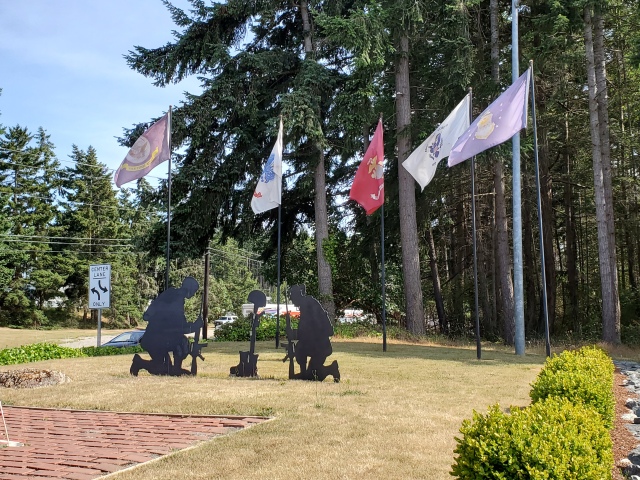 Most of the time we did a lot of just kicking back and watching Puget Sound. Occasionally we were fortunate enough to see some grey whales right off shore from the campground. 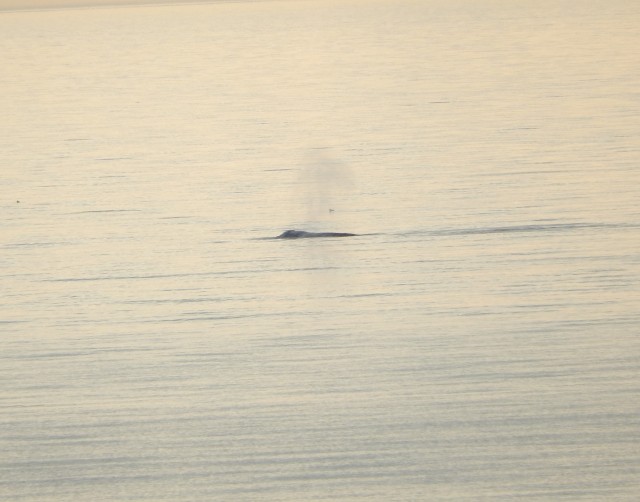 Walking along the beach was amazing! Huge logs of driftwood are scattered along the shore. At various points kids had built shelters and forts. I couldn’t resist trying one of them out. 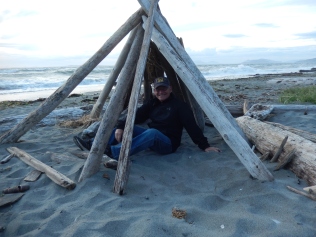 The weather was pleasant during most of our stay, but one day we had a heckofa blow and the surf showed it.

Our daughter, Elisabeth, joined us for a long weekend. We took the ferry to Friday Harbor on San Juan Island. We had thought about taking Elisabeth’s car on the ferry, but all of the reservations for the morning were taken, so we opted for Plan B. Plan B was to walk on the ferry and take the hop on, hop off Trolley around the island. The only problem with this is that once you hop off it’s another hour before the next trolley come along to hop back on. 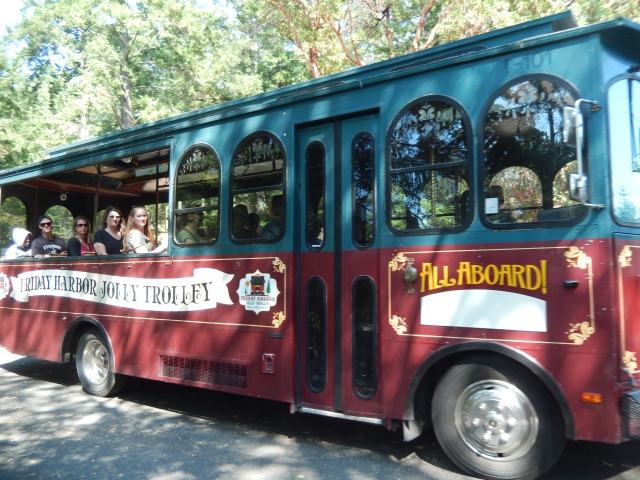 The ferry ride was interesting and, as always, I was fascinated by the loading and unloading of the vehicles. There was comfortable seating, a snack bar with ridiculous prices, and great views of the islands of the Strait of Juan DeFuca. 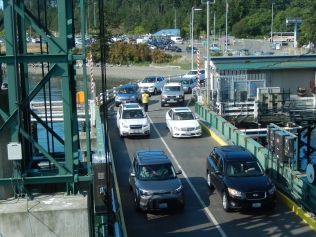 We got our tickets for the Trolley and checked out the local wine shop, appropriately named the Island Wine Company. We sampled the wine, and bought a souvenir wine glass. We wandered around the area a bit and then hopped on the Trolley. Our first stop was Roche Harbor where we toured the Sculpture Park and the downtown area. This was initially the main British port for the island, but eventually turned into a huge tourist resort. 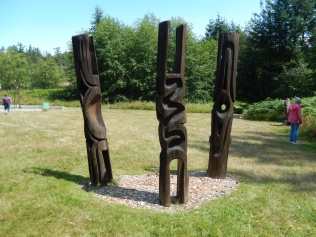 After that we stopped at the English Camp. There was a major dispute over the ownership of San Juan Island. The Oregon Treaty of 1846 identified the 49th Parallel as the border between Canada and the United States, but the border in the Straits of Juan DeFuca was unclear. While the dispute was being settled by a neutral international arbitration commission the British and U.S. jointly occupied the island. The English Camp and American Camp were on opposite sides of the island. The British allocated large amounts of resources to make life comfortable for their soldiers, sadly the same could not be said for the Americans who made do with minimal support and went through 15 commanders in 12 years. In 1872 the three-man commission led by German emperor Wilhelm I decided in favor of the U.S. The British forces withdrew in November of 1872 and the U.S. Army withdrew in July, 1874.

Our last stop was the Lime Kiln Point State Park (AKA Whale Watch Park) where we listened to a Ranger Talk on whales. Unfortunately we didn’t see any, but we did check out the nearby lighthouse. 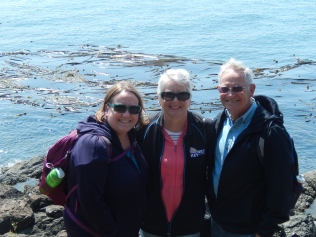 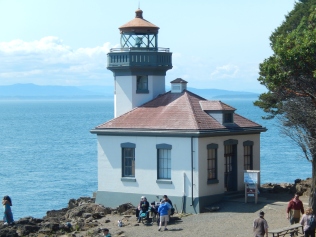 Back in Friday Harbor we had dinner at the Cask & Schooner Public House & Restaurant overlooking the harbor before we boarded the ferry for the trip back to Anacortes.

Later in the weekend our son, Scott, and his twin daughters came up and camped in the nearby Deception Pass State Park. We all hiked up to and across the bridge over Deception Pass. The bridge is a tourist destination. The traffic slows as people gaze down at Deception Pass as they drive onto the island. We enjoyed meals together, the twins swam in the Sound, and Scott and I did some kayaking on nearby Cranberry Lake. What a great weekend.

On Wednesday, we packed up and headed back to Lakewood and finishing up Elisabeth’s condo.