Posted on September 18, 2019 by Michigan Traveler

You can’t be in the Seattle/Tacoma area and not know about Mount Rainer. On a clear day it is visible from almost everywhere. In my opinion it is one of the best attractions in the area. 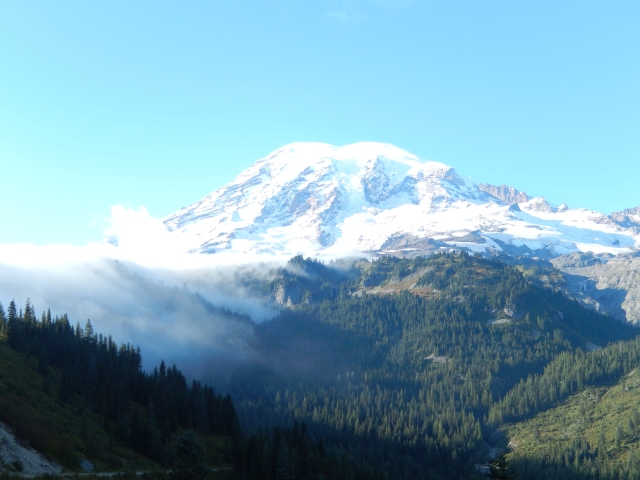 We were able to take the twins, Clarissa and Sierra, for a day trip to Mount Rainer. We had taken all three granddaughters with us three years ago and the twins had visited there with a group earlier, but all of those trips had been to the Paradise area at the southern end of the park. This year we decided to go to the northern end and visit the Sunrise Visitor Center and hike in that area.

It is about an hour and a half drive to Sunrise and we could see the clouds surrounding the mountain in the distance. The curving road afforded some great views (for those who were not driving!).

The history of these mountains goes back to the early Indian tribes. They have several stories that describe their origins. Visiting these mountains and bringing our kids continues to keep this history alive. 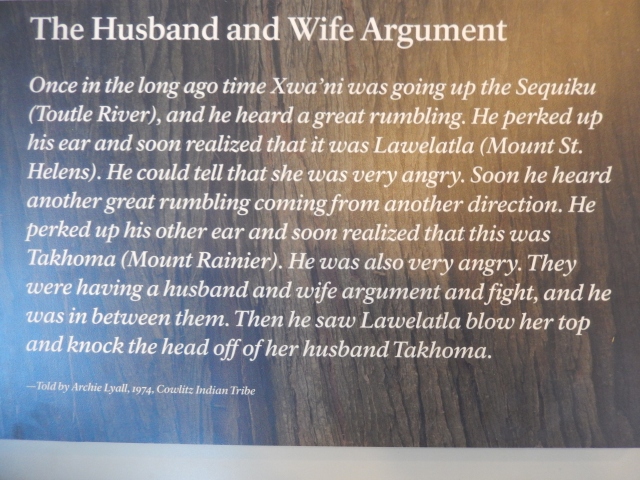 Our first stop was the Visitor Center where we got our Junior Ranger workbooks (yes, I did too). As I have said before, I hope whoever developed this got a raise, because this is a great way for visitors of all ages to learn about the park. I have a friend (my age) who has a Junior Ranger badge from every National Park they have visited. While we learned a lot in the Visitor Center, the display that impressed me the most was the plaque memorializing five employees who died in the line of duty. That’s something we never consider, the sacrifices that are made by the people that work in the parks. 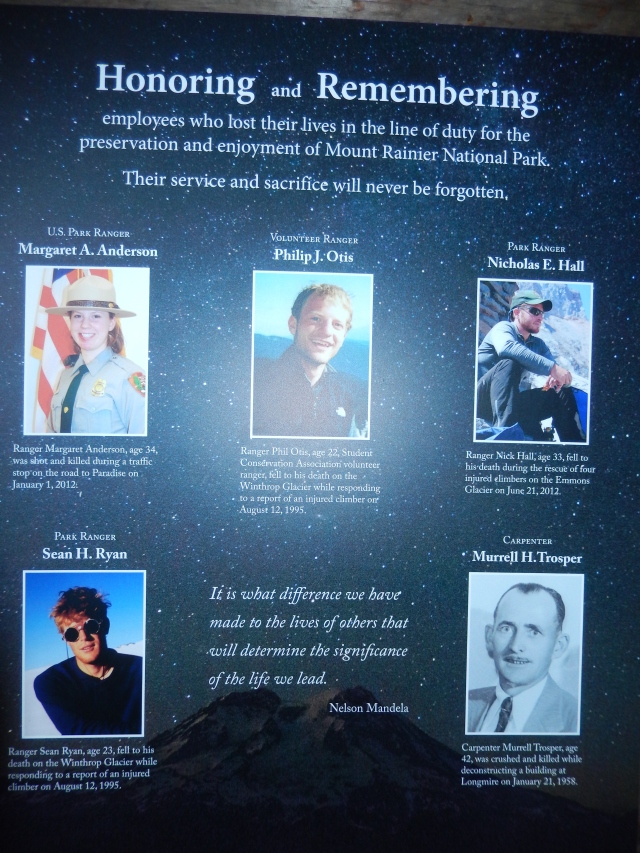 We participated in a Ranger presentation on volcanoes (including an eruption with lava). After that we ate lunch at the picnic area where we planned our route and worked on our Junior Ranger workbooks. We laid out a hike of about four miles that would be fun and not too challenging. 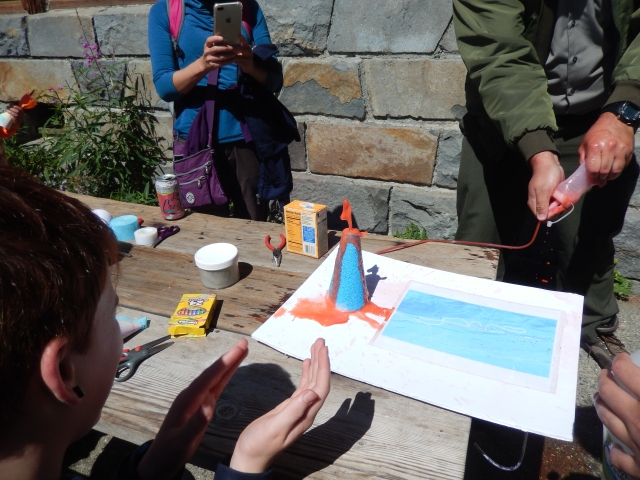 It was an absolutely beautiful day for a hike; sunny, with mild temperatures so we weren’t too hot or too cold. The skies around the mountain cleared and we were treated to awesome views of the mountain and the glaciers on its slopes. 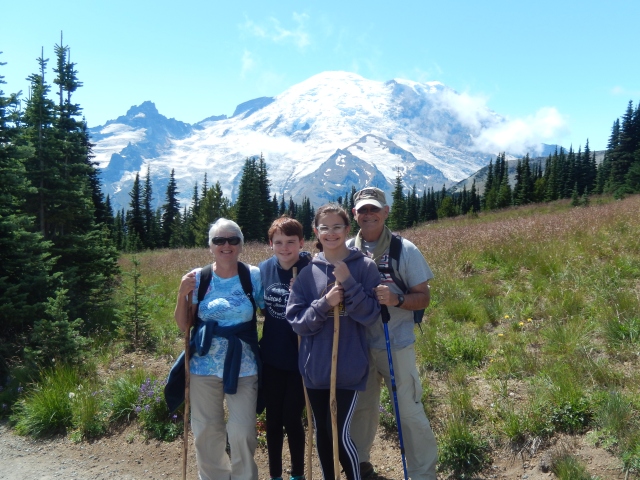 Our first stop overlooked some sub-alpine meadows that reminded me of those we had seen in Germany. 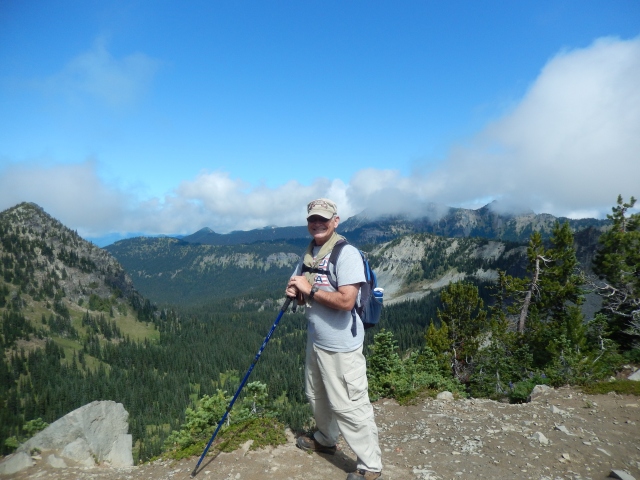 We continued our climb and looked back at the Visitor Center seeing how high we had climbed. 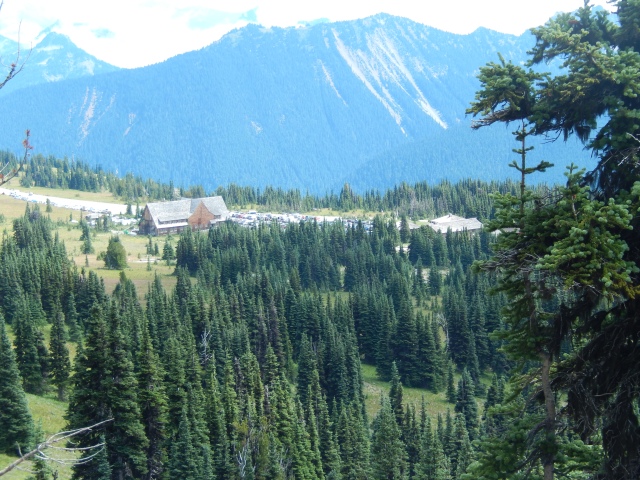 We climbed into the Alpine Zone above the tree line and couldn’t help but see the difference. 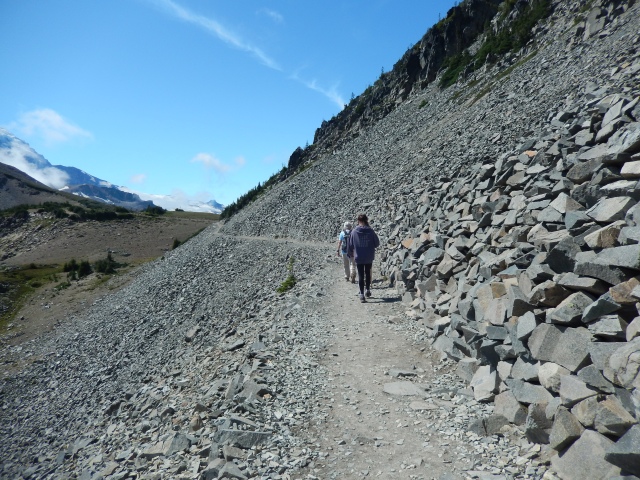 We had some company while we took a break near Frozen Lake. 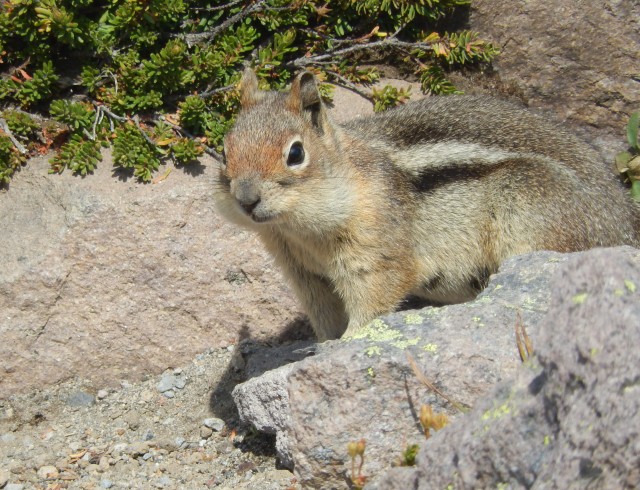 The downhill side of the hike brought us into some meadows and a hike-in campground near Shadow Lake. On the last leg of the hike we had the best view of the Emmons Glacier. 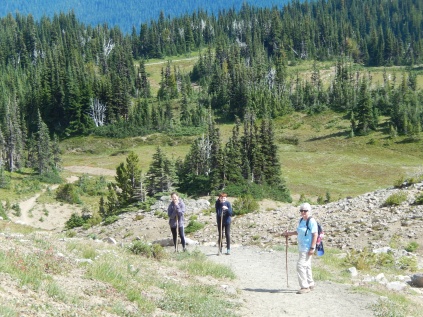 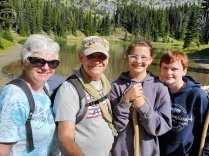 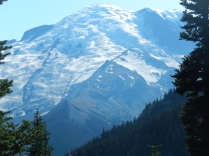 Back at the Visitor Center we turned in our workbooks and all three of us were sworn in as Junior Rangers of Mount Rainer. The drive back was an anti-climax but an easy drive.

Bob and his wife, Pat, are fulltime RVers. They sold their home in Michigan in June, 2011 and now travel the country, living on the road. Home is Where You Park It!
View all posts by Michigan Traveler →
This entry was posted in Fulltime RV, Michigan Traveler, National Parks, Washington and tagged backcountry hiking, Junior Ranger, Michigan Traveler, Mount Rainer, RV Forums. Bookmark the permalink.