This was our seventh winter of the last nine years in Key West. We have never found a nicer place to spend the winter. I don’t think you can get any farther south in the Continental US. As we have mentioned in the past what draws us here is not the physical setting (as pleasant as that is) but the people. We stay at the Naval Air Station RV park in Key West and are among the hundreds that return here every year. We have more friends here than we ever had in the neighborhood where we owned a physical home.

I’m writing this in the middle of the COVID-19 crisis and I almost skipped over our stay in Key West to write how we are dealing with the crisis, but I want to write about something enjoyable before I got into that topic.

Pat and I brought in the New Year with our friends Roger and Bonnie Ford at Navigator’s, the club at the Marina at Boca Chica Airfield. Roger and Bonnie’s favorite band, Island Time, was there to entertain us and we had a great time!

Our little military community at the Sigsbee Island RV Park (NAS Key West) is an active place. For most of us age is just an irrelevant number. We started the year off with our Annual Polar Plunge. We met at the northeast corner of the campground where we formed up and walked into the “frigid” water which was a numbing 78o. After a group dunking underwater we joined together for our first potluck with ceremonial Bloody Marys and Mimosas. 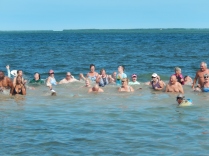 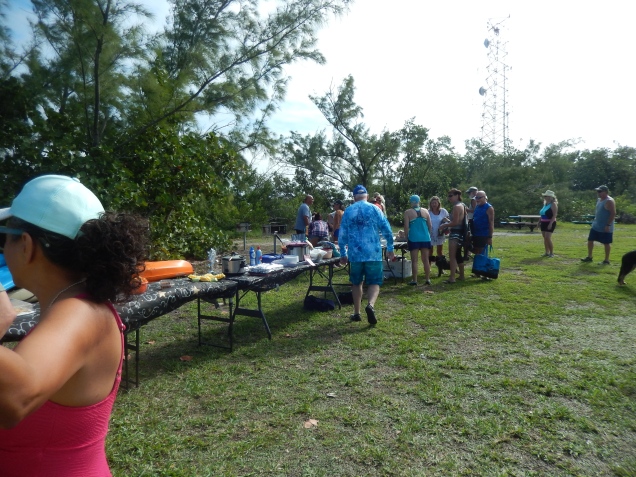 Beautiful sunsets are a routine occurrence at Sigsbee, but they always seem to be a special time in the campground. Another popular activity is taking advantage of the abundant “happy hours” on Key West. One of our favorites is the Commodore Boathouse which is located right on the Historic Seaport. It has great food, good drinks, and a terrific view of the vessels going in and out of the harbor. 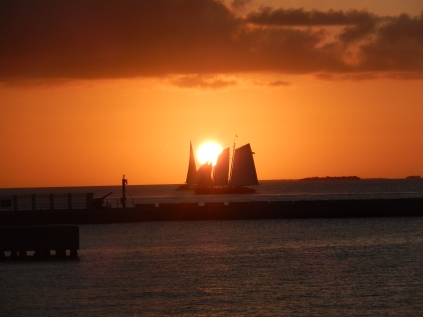 I always feel the Pat’s birthday (Dec 27th) gets lost in the middle of the Christmas festivities and decided to make up for it this year. I partnered with some friends of ours, Ray and Harriet Riendeau to give her a surprise party. It was a total surprise, a great time, and she has finally forgiven me for making her the center of attention. 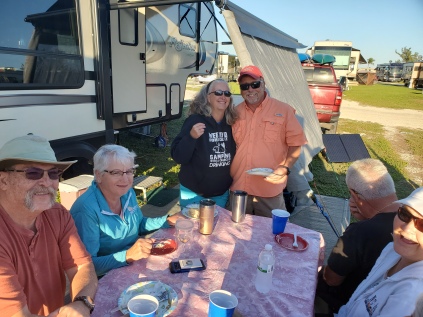 There is great kayaking in the Florida Keys and we hooked up with another couple, Brian and Cindy, to go kayaking in the mangroves at Geiger Key and the Salt Ponds near the airport. There is so much to see, both above and below the water. Some of the channels through the mangroves are pretty tight and we weren’t always sure we took the right turn, but that is part of the fun. 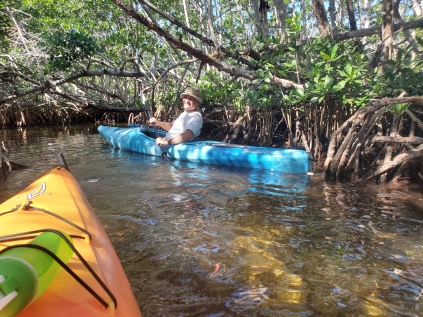 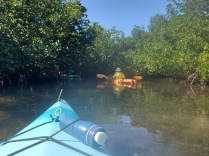 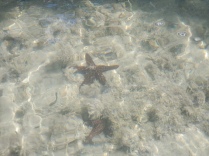 A special treat this year was seeing Reverend Franklin Graham at the Key West Auditorium for his Decision America series. Contrary to what you may have heard or think about Franklin Graham, it was a wonderful, non-political, uplifting experience.

One of our regular events is the Key West Half-Marathon. We don’t run in it, but volunteer at the merchandise sales and water stations. I feel it is safe to say that this year’s volunteer shirts were very colorful and they made me want to break out is singing, “It is the dawning of the Age of Aquarius!” For a change we had beautiful weather and it was a lot of fun.

Eddie and Tina Grooms have become the unofficial social directors for the campground and hosted several major events throughout the season. Their first was a Hawaiian potluck. It’s always a fun time when everyone brings their favorite dish to share. 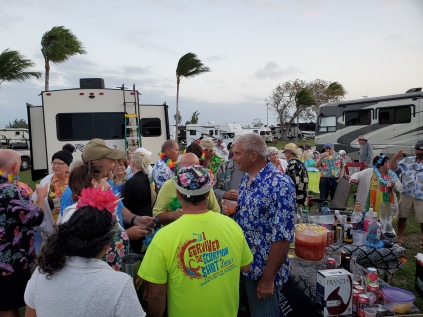 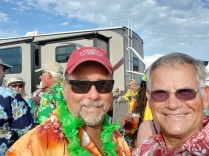 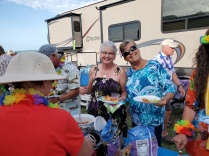 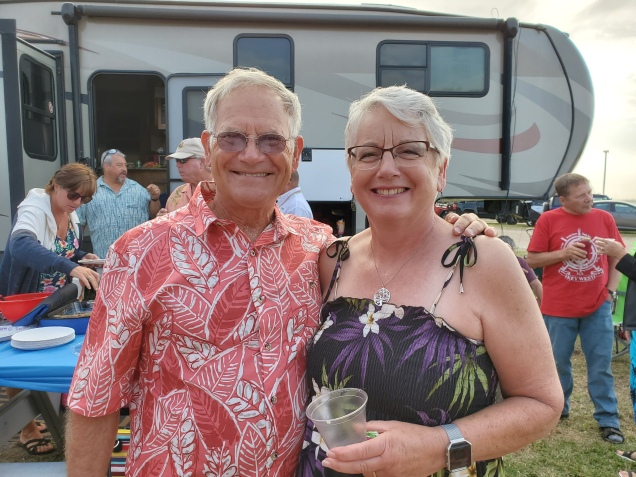 The Schooner Appledore II took a whole crew of us on an afternoon sail from the Historic Seaport. They provided the drink and we provided the food. It was a beautiful day with clear skies and light, but steady winds for great sailing.

I continued my tradition of volunteering as a docent on the Coast Guard Cutter Ingham Museum. While the fulltime crew has always treated the volunteers as valued members of the crew, this year they threw a special party for us with pizza, drinks, and a showing of the movie, Operation Petticoat, which was filmed in Key West. It was fun to pick out Key West landmarks in the movie that was set in the South Pacific. 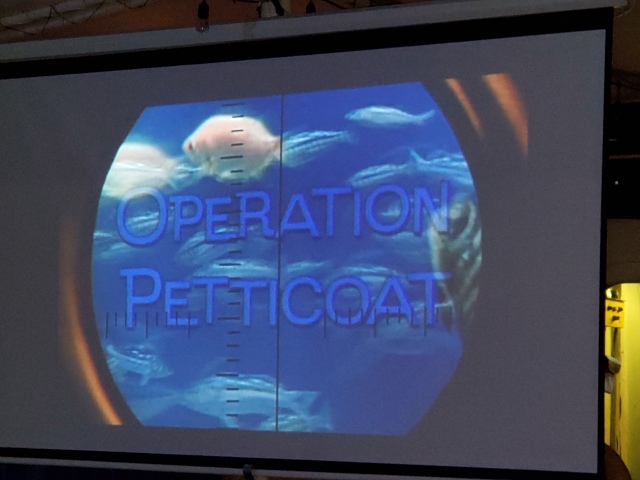 We also volunteered to “Plog the Keys” picking up trash along the streets of Key West. The organizers posted the location on Facebook every week and we would meet there on Friday morning to do our thing.

We had a very unique event this year. One of our fellow campers, Marty, does chainsaw sculptures! He didn’t bring any logs with him but one was available so he gave us a demonstration. What a talent! He has won several awards for his work and it was obvious they were well deserved. 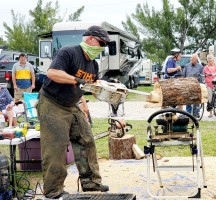 For me it wouldn’t be Key West without music. I rejoined the praise team at the Base Chapel. Every Monday afternoon Gary Buck hosted a jam session at the Sigsbee Community Center. What fun to play with a bunch of guys and gals who enjoy music and are trying to become better musicians! Geiger Key Marina hosts an Open Mic Night every Monday and a couple of us were regular performers there. Great fun, great practice, and a great way to get over stage fright! 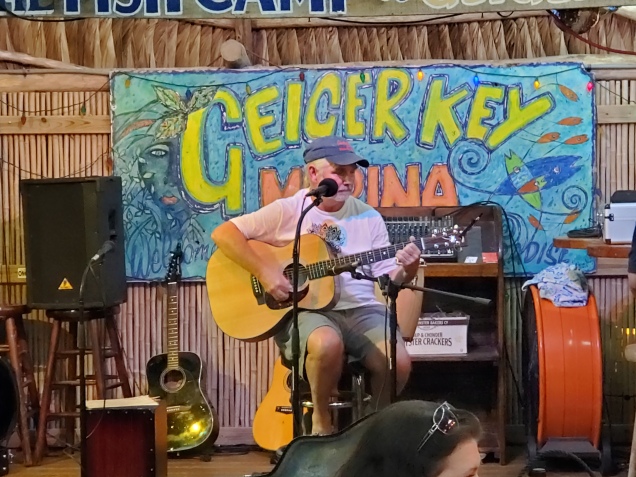 Two friends of mine, Nelson Clark and Harriet Riendeau, and I presented a Folk Music Concert at the Community Center. It was well attended and I’m not sure who had more fun, the audience or the musicians. I think the audience enjoyed listening to three very different styles of music in one performance.

As we approached the end of the season Eddie and Tina had one more event, Cinco de Marcho. Because most of us go “Up The Road” or UTR in March they decided we should celebrate the holidays we were going to miss. In an almost day-long party we celebrate Cinco de Mayo, St. Patrick’s Day and any other holiday we wanted to throw in. It was a great culmination of the winter season and we are already looking forward to another fun time in 2021. 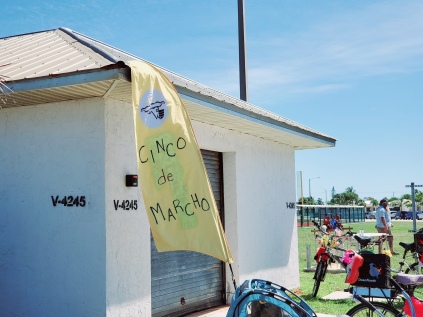 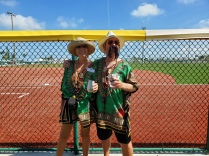 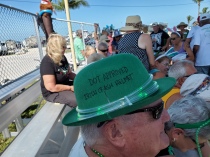 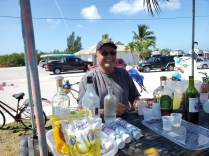 On March 10th we headed up the road and into the unknown world of COVID-19.

Bob and his wife, Pat, are fulltime RVers. They sold their home in Michigan in June, 2011 and now travel the country, living on the road. Home is Where You Park It!
View all posts by Michigan Traveler →
This entry was posted in Florida, Fulltime RV, Michigan Traveler, Military RV Parks and tagged Coast Guard Cutter Ingham, Key West NAS, Sigsbee Island. Bookmark the permalink.

3 Responses to Just Another Day in Paradise – Jan-Mar 2020