In May of 2019, as we were leaving our campsite at Elsworth AFB, our fifth-wheel trailer slid out of the hitch and dropped onto the bed of our pickup. I had visually checked it and we did our test pull, but it still happened. We had the trailer and truck repaired over the summer at Wescraft Truck and RV in the Tacoma, WA area, and thought we were good to go. Unfortunately, as we were traveling to Florida, I noticed that the trim molding under the front cap had been damaged and was bent. I attempted to fix it, but the same condition reappeared after each fix. After more investigation, it appeared that the frame behind the cap was moving independently of the side of the trailer. By now COVID-19 was going on and we headed to Michigan to “hunker down.” Once we arrived in Michigan I found that my normal RV dealer was closed down, but I was able to make an appointment with General RV in Birch Run, MI. I had never had service done there but had used their retail store. As they are a major RV dealer, I thought I would use them to fix this problem.

I contacted Wescraft RV who had done the repair in Tacoma and they said they guaranteed their work and would pay for the repair. I drove the trailer to General RV on June 1st. General RV did not want to begin work with just a verbal agreement so I paid them $3,300 to open up the front of the trailer and begin the repair. If Wescraft didn’t cover everything, I intended to pay the balance. I stressed to our service advisor, Shianne, that we were fulltime RVers, and whatever they could do to expedite the repair would be greatly appreciated. She said it would depend on how long it would take to get parts, and I commented that I didn’t think it would need any parts they didn’t have in stock.

Monday, June 8th I got a call from Shianne and she asked me to come to their shop and see what they had discovered and make some decisions for the repair. They discovered that the original bolts had been sheared off when the trailer hit the bed of the truck and the screws that had been put in by Wescraft had not adequately carried the weight of the trailer and they had sheared off as well. We agreed that they would run carriage bolts through the frame and they would have to drill holes in the fiberglass side to do that. I agreed with this and they suggested that they cover these holes with a decal as it would be better than trying to match the existing paint. I thought that was a great idea and told them to go forward with the repair. I again reminded them that we were fulltime RVers, we were staying with my brother and sister in law but didn’t want to take advantage of their generosity. I asked her to do whatever they could to expedite the repairs. 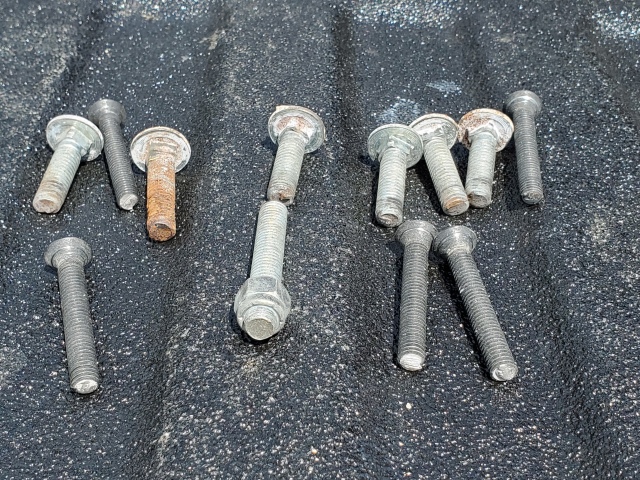 At the end of the week, I called General RV to advise them I had confirmed that Wescraft was going to pay for the repairs and only needed an invoice for the total amount. Shianne told me that the shop that does the decals would be out to color match the decals to the existing ones on the trailer on June 24th. She told me they had completed their repairs and would send our trailer to Rush RV, the dealer in Holly, MI that they use for bodywork after the decals were done. I suggested that they send the trailer to get the bodywork done while they were waiting on the decals, reminding her we needed our trailer back as soon as possible.

On Tuesday, June 16th I called Rush RV to ask them how soon they could start on the work and was told “we could start today if it was here.” I called General RV and left a voice mail with Shianne to advise her of this. I called Rush RV again, on Thursday, and asked if they had heard from General RV yet. Al, the manager, told me that he had not and I asked again when he could start and I was told “we could start today if it was here.” When I called General RV, Shianne said, “He didn’t tell me that.” I said, “I just asked the question, ‘how soon can you start?’” She said she would go to their front desk and schedule a driver to take it to Holly. I offered to move the trailer myself but she said they couldn’t let me take it without payment.

I called Rush RV on Monday, June 22nd, and was told that our trailer had been delivered that morning. On Tuesday I had to drive to Lansing, MI on another matter and stopped by Rush RV on my return. I met with Al, the manager, and he told me that he had three rigs ahead of me because they had come in on the weekend. I told him that we were fulltime RVers and would appreciate it if he could get the job done as quickly as possible. While looking at the trailer I saw that the trim molding under the cap did not go all the way to the wall of the trailer. I asked him if he was repairing this and he told me, “No, we are only repairing the crack in the cap.” He took a picture of it and said he would contact General RV to make sure he wasn’t supposed to fix it. I spoke with him the next day and he told me that General RV was doing that.

On Wednesday, June 24th the decal shop, Custom Design Accents, drove to Holly to do the color match. On Thursday, Al told me the work was done and he had told General RV they could come and pick it up. I called General RV and told Shianne that the trailer was ready for them to pick it up. She said she would schedule that and I asked her about the repair that needed to be done with the trim molding. She was unsure what Al was talking about and I told her Al had sent her a picture. I described what was wrong and she assured me she would look at it.

On Tuesday, June 30th I called and asked Shianne if they were repairing the problem with the molding. She said she would get with Tom, the technician that was working on it, and see want needs to be done. I asked where we were on the decal and she told me Custom Design was going to send her a picture that she would forward to me. Once I approved the picture they would make the decal and come to Birch Run to apply it. I asked how long this would take and she said it should be done by the middle of next week. I reminded her that they had had our trailer for a month now and it was not just our RV but our home. She then told me she was doing what she could and would try to have it by the end of next week (July 10th) at the latest.

On Wednesday, July 1st we joined other family members at the family cottage on Rifle Lake near Rose City, MI. While it’s a great place to stay it has very poor cell phone coverage. On Thursday, I spoke with Shianne and she said she had the pictures of the decal. I drove to a nearby gas station where I could get a good cell signal on our WIFI hotspot so I could download the picture. Then I drove back to the cottage, checked with Pat to see if she approved, then called Shianne to tell her we approved to picture and to get things moving. I emphasized with her we must have our trailer by Friday, July 10th. 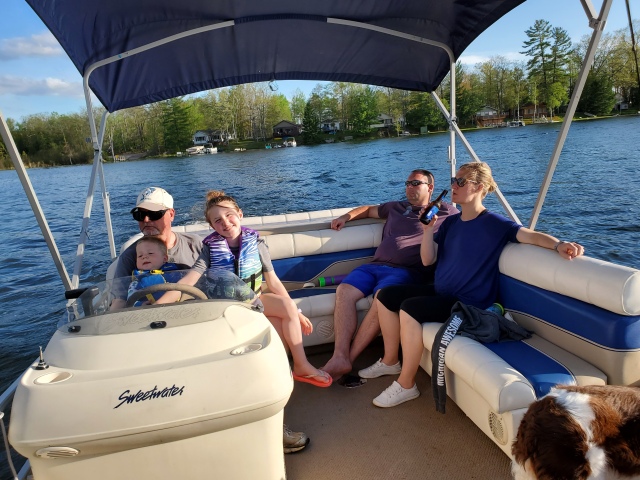 On Monday I called General RV to check on when the decal was to be applied and I was told that Shianne was not in the office that day. When I asked when she would be in I was informed that she was on vacation until July 16th! I said I needed to talk with someone who could deal with this. I was told the Service Manager would call me back. No one called me back. On Tuesday I called again and spoke with another Service Advisor who said his supervisor was covering Shianne’s customers and he connected me to Sarah. I told Sarah about the situation and asked when the decal would be applied and if the trim molding was fixed. She said she would check it out and call me back. Because we were in such a bad cell area, I called her back and she told me that the decal would be applied on Wednesday afternoon and we could pick up the trailer on Thursday. I gave her the email address for Wescraft RV in Tacoma so she wouldn’t have to search Shianne’s files for it. I asked her about the trim molding and she told me that I had said I didn’t want any new parts so they weren’t fixing it. I, not so politely, told her that I had said no such thing. However, at this point, I just wanted to get the trailer back and I felt this was something that I could fix on my own. I told her we would plan to be at Birch Run on Thursday. 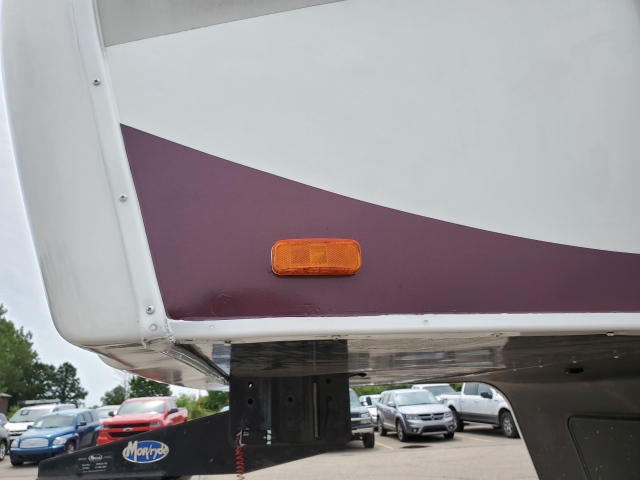 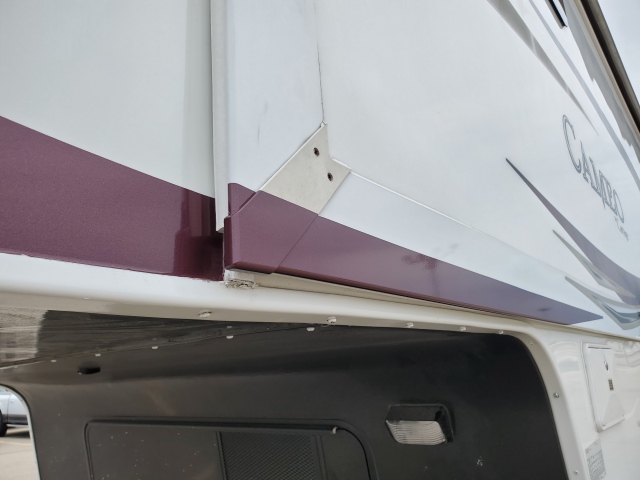 Wednesday I called Wescraft to see if they got the invoice and I was told that they called Birch Run with the credit card information right after they got the email. I called Sarah and she said they hadn’t gotten payment. So I told her to call Wescraft and talk to my contact there. Fortunately, things worked out, so I didn’t have to worry about that.

We packed up our stuff at the cottage and headed down I-75 for Birch Run. En-route we called Sarah to coordinate our pick up. She informed me that one of their technicians had found some trim molding and had installed it at no additional cost, what a nice favor (note the sarcasm)! 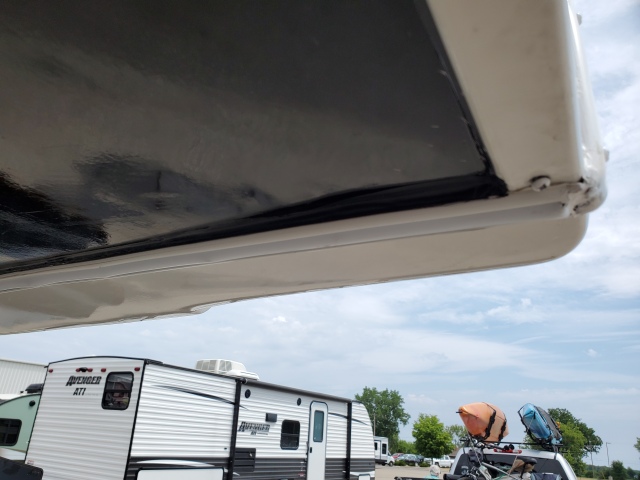 Finally, after 41 days in the shop, we had our “home” back and we were able to sleep in our own bed again. I don’t know what I could have done differently, but I don’t plan on ever utilizing General RV in Birch Run again, not even their retail store. This whole thing has been one terrible experience in customer service and project management. I guess the only advice I would give to anyone is to be your own project manager and double-check on any major work you have done on your RV.