Posted on December 4, 2015 by Michigan Traveler

We arrived at the Falls Lake State Recreation Area on Friday, September 18th. We didn’t start our duties as camp hosts until October 1st and it felt a bit odd coming in as campers. After setting up our daughter, Elisabeth joined us and we went out for dinner. Over dinner we decided that we were looking at what might be the last nice weekend for quite a while and decided that Elisabeth and I would go SCUBA diving on Saturday and Sunday.

We rented gear and tanks that night and the next morning Elisabeth picked me up. We drove to a popular dive site called Fantasy Lake. This is an old rock quarry that flooded and was turned into a SCUBA diving center. Popular is an understatement, the place was full of divers from dive shops from as far away as Greensboro, NC. Fortunately most of the diving activity was centered around the underwater training platforms and we chose a less populated area of the lake.

It was a beautiful day and the water was a pleasant temperature with decent underwater visibility. Fantasy Lake is full of neat things to find underwater, a bus, a couple of planes, glass-bottom boats, several cars, you name it. We found one of the cars on our first dive, and swam along to vertical wall of the quarry. It was almost like swimming along a reef wall in the Caribbean. We dove again after lunch and Elisabeth was getting more comfortable with her SCUBA skills.

Sunday we were back at Fantasy Lake and it was a lot less crowded. We bought Elisabeth a new buoyancy compensator as an early Christmas gift and she was very happy to get rid of her weight belt. We practiced buoyancy control on the roof of the bus, and swam back along the wall. After lunch we swam in, around, and through almost every underwater attraction in the lake. It was just a great weekend of diving and we are all looking forward to going to Bonaire in January. 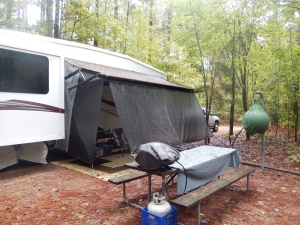 We had a couple of relaxing days and then the weather closed in on us. There was one weather system after another bringing rain into the Carolinas. Fortunately, the weather was mostly clear on the day we had to move into the camp host site. We got all set up and I put up our sunshades on the awning to block some of the rain and make it easier to get outside a bit.

We watched the weather and saw Hurricane Joaquin run up the east coast. Finally after 12 days of constant, measurable rain we finally saw the sun. The last time North Carolina had 12 straight days of rain was in the 1980s.

One Saturday Elisabeth’s employer had a family fun day at a local attraction called Frankie’s, and we were invited to join in the activities. The rain put a damper on any outside activities, but the indoor attractions were a lot of fun. Over lunch we were able to meet and chat with some of her coworkers. We played arcade games and three rounds of laser tag. We had a terrific time and it’s nice to see an employer go the extra mile for their staff and families.

Our duties as camp hosts are simple. We make sure the bathrooms are clean, act as an example for other campers, and assist other campers as needed. Generally we are not needed to help other campers. However, we had a case where a woman had purchased a new camper and, although she had a three-hour session on how everything worked. She was very confused about how to use many of the features of her trailer. Over the next few days I spent a few hours walking her through the appliances and other components of her trailer. By the time she left, she felt much better about her situation and I felt we had provided the assistance we were put here for – a good feeling.

The Rangers of Falls Lake, together with the non-profit Friends of Falls Lake, put on a Halloween party at the campground amphitheater. There were treats, games like Pit the Face on the Pumpkin, face-painting, campfire stories, and a night hike. It was well attended and everyone had a good time. 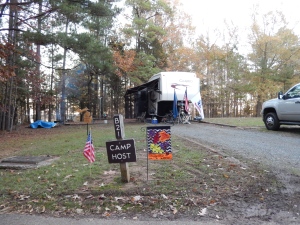 on November 1st for the winter and we moved to the Rolling View Campground of the Falls Lake State Recreation Area. Rolling View is open year round and we were able to continue as Camp Hosts. At Rolling View, in addition to being an example of good campers and assisting other campers, our duties were to check the campground every morning and post the list of campsites that were available for campers without reservations. This gave our normal exercise routine more of a purpose.

I was able to finish my audiologist appointments to fit and adjust my new hearing aids. I’m sure my family and friends 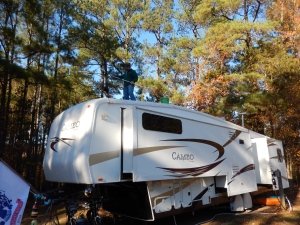 will be happy that I won’t be asking them to repeat things as often. I guess this is just another measure of age along with bifocal glasses, knee problems, and enrolling in Medicare. I’m not sure I like any of these measures, but it is what it is.

We generally took it easy, hanging out and visiting with Elisabeth. One thing about the fulltime RV lifestyle is that you are not always sightseeing – we are living in a house that moves. As we began our preparations to leave I washed the trailer – 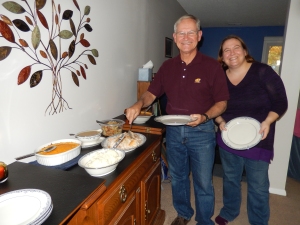 generally a 3-4 hour job. Just like a house, you have to maintain it.

We spent Thanksgiving with Elisabeth and had a family dinner at her house. We had a wonderful meal and it was nicer because we had it with family. While our sons, Scott and David, weren’t there, we were able to talk to them on the phone. After dinner we helped Elisabeth decorate her place for Christmas – just a great time!